The pandemic-related expanded benefits for the unemployed are expected to end in September. States that have ended the booster early have seen a sharper decline in initial claims than states that haven’t ended them. Although the end of enhanced employment benefits could help resolve the labor shortage, there is also the likelihood that it could lead to an increase in the unemployment rate. If this happens, this could force the Fed to rethink its decision regarding when to reduce its policy accommodation. In this report, we will discuss the possibility that the unemployment rate could rise and how it could impact monetary policy.

Currently, the labor market appears to be improving. National continuing jobless claims have fallen from an all-time high of 23 million in March 2020 to 3.5 million in June 2021. Additionally, during this time frame, the unemployment rate fell from 14.8% to 5.9%. The labor market has tightened so quickly over the last few months that firms have struggled to find workers to fill their open positions. However, this labor tightness is somewhat misleading. Continuing claims, currently at 3.3 million, remain well above the historical average of 2.8 million. In addition, employment has not recovered to its pre-pandemic peak. Finally, labor shortages remain especially bad in particular industries, most notably, Leisure and Hospitality and Transportation and Warehousing.

Since the start of 2020, many firms have been forced to limit their operating capacity to meet COVID-19 restriction guidelines. Firms, particularly in services, were forced to reduce the number of customers they could serve, limit their offerings, and, in some cases, temporarily shut down to comply with restrictions. As a result, there was a huge drop-off in hiring in the services sector at the start of the pandemic. Although the removal of restrictions led to a resurgence in hiring, the recovery was uneven.

As the recovery accelerated, firms began to rapidly increase hiring. Services related to tourism and travel, in particular, saw a spike in sales. Consumer expenditures on travel and airlines have doubled from the prior year. As a result, firms that found themselves understaffed began raising wages. When that didn’t work, states voluntarily withdrew from the extended unemployment benefits program to increase the size of the available workforce. Although somewhat successful, the initiative highlights the fact that there are still a lot of workers that haven’t committed to looking for work. Hence, when extended benefits end in September, it could lead to an increase in the number of unemployed people genuinely looking for work.

The timing of the expiration of the expanded benefits may also play a role. Many of the new jobs that have been added over the last five months have come from industries that are traditionally seasonal. For example, leisure and hospitality accounted for 60% of the jobs created in that period. For comparison purposes, the sector has accounted for 20% of the jobs created in the last decade. This problem becomes more apparent when you consider that a growing share of Leisure and Hospitality jobs are coming from Arts, Entertainment, and Recreation, a sector known for its seasonal swings. In other words, ending the expanded benefits could lead people back into the labor market at a time when firms are starting to slow their hiring. 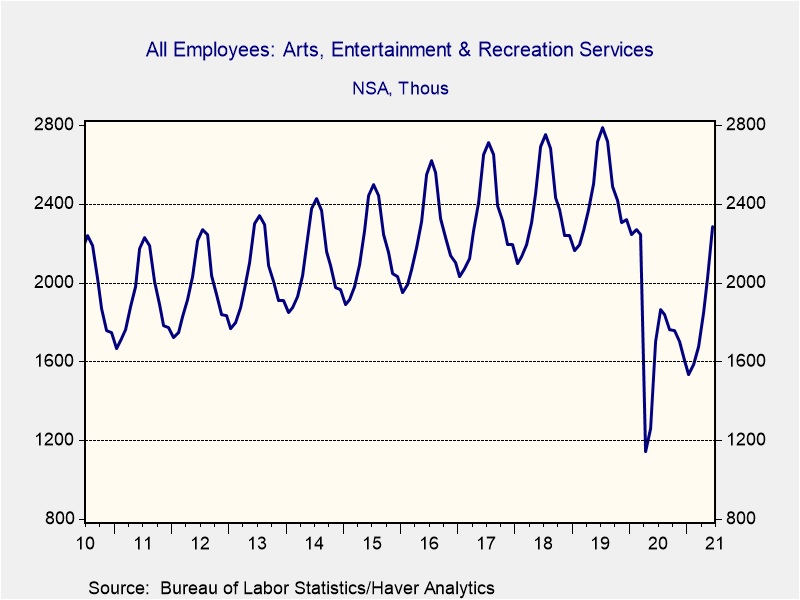