Equity markets, to a greater or lesser degree, tend to reflect social and political trends.  After all, the mood of investors plays a role in the propensity to move money into stock markets.  Unfortunately, the impact of social or political events on equities tends to be a mixed bag.  The chart below shows over 120 incidents from 1896; some events were notable, while others had only a modest impact.

What is notable about this chart is that some factors can be bullish, such as the creation of the assembly line or the introduction of the internet.  Some events would seem to be negative, but the impact is fleeting, whereas other negative occurrences have a much more significant impact.

The U.S. is experiencing a wave of civil rights protests similar to what occurred in 1968 (#73 on the above chart).  On its face, civil unrest would seem to be a negative factor for investor confidence.  However, at least initially, the widespread protests may lead to a policy response that is supportive for equity prices.

One of the effects of the 1968 civil unrest was the Humphrey/Hawkins Full Employment Act.  The law required policymakers to strive for full employment.  In fact, the bill had four policy goals—full employment, a balanced fiscal budget, a balanced trade account and price stability.  As anyone with a modicum of formal economic training can note, these four goals are not necessarily consistent.  In other words, achieving full employment and price stability or a balanced budget may not be possible.  Therefore, policymakers had to decide which goal was preeminent.  The bill was passed in 1978; by the time it was enacted, concerns about full employment had been supplanted by inflation worries so the bill never really lived up to its sponsors’ goal of full employment.  However, it is this bill that requires the Fed chair to semiannually travel to Capitol Hill to talk about monetary policy and the economy.

Forty-two years after the passage of Humphrey/Hawkins, there is growing evidence that the Federal Reserve is focusing on employment, especially minority employment.  Spearheading the effort is Atlanta FRB President Bostic, who recently penned a letter on racism.  But, beyond what the Federal Reserve system can do with its own hiring and its regulatory power over lending, there is a question about what monetary policy can do about this issue.  After all, setting interest rates is a blunt policy instrument.  In his recent press conference, Chair Powell noted that minority unemployment had declined markedly before the pandemic, but has risen since the recession occurred.  In his opinion, the best way to boost minority employment is to foster a strong labor market. 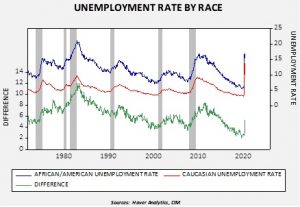 This chart shows the unemployment rate for African Americans and Caucasians.  The rate for the former is persistently above the latter, but what is notable is that the longer an expansion lasts the narrower the difference between the two series becomes.  If the Fed is serious about reducing African American unemployment, one of the important policy goals would be to extend the expansion as long as possible.

To some extent, this is nothing new; monetary policy isn’t designed to end an expansion prematurely.  But, this information signals to investors that the Fed has yet another reason to preserve an expansion, which is supportive for equities—unless it becomes apparent, at some point in the future, that the FOMC would be willing to allow inflation to rise above target to preserve the expansion.  In general, for the past 33 years, major declines in equity markets have been tied to recessions.  That is true, in part, because the Federal Reserve has earned inflation-fighting credibility.  It remains to be seen whether what we are observing now represents a more notable shift away from inflation suppression.