Over the holiday, I had the pleasure of reading Sebastian Mallaby’s recent biography of Alan Greenspan.[1]  The book was thoroughly researched and well-written, and I recommend it to our readers, albeit with fair warning—it’s long and the endnotes are critical to fully understanding the points of the work.

Here are the key points of the book.

All presidential administrations want easy money:  Truman implored William Martin to accommodate the Korean War spending, intimating that not doing so was supporting communism.  Nixon leaked a rumor (perhaps an early form of “false news”) that his Fed Chair, Arthur Burns, wanted a pay raise.  The report infuriated Congress and put Burns on the defensive.  Nixon let Burns know that he would set the record straight in return for easy money.[2]  Nixon got his wish.  Ford wanted accommodative policy.  Reagan consistently complained about Volcker’s tight policy and believed a return to the gold standard would be a painless way to weaken inflation expectations.[3]  George H.W. Bush felt Greenspan’s tight money cost him the election.[4]  Bill Clinton generally avoided publicly criticizing the Fed but was worried that high bond yields would kill the economy.[5]  The goal of any president is to stay in power; having the unfortunate circumstance of a recession occurring into an election year is a career-ending event.  Thus, wanting the central bank to support the economy into the election is a desire of all presidents.

Financial crises are inevitable—so are government bailouts:  Greenspan was a devotee of Ayn Rand and a member of her “Collective.”  He opposed government support for bad behavior.  However, his youthful position changed as he entered government.  The political and economic fallout of letting large and connected financial firms fail was simply too costly.  Although the heavily regulated and geographically dispersed financial system avoided crises from 1945 to the early 1970s, it was also an era of higher rates and a less efficient financial system.  For example, the ratio of prime lending rates to fed funds in the 1950s to the late 1960s was 1.57x; that fell to 1.18x from the 1970s to the late 1980s.  However, improved financial market efficiency came at the cost of financial system problems.  What the book makes clear is that regulators won’t prevent crises and no regulator has determined a level of capital that will, either.  The only way to reduce the frequency of financial crises and bailouts is through policies that make the financial system less efficient.  During good times, the majority of people want the financial system to accommodate their borrowing desires.  Thus, they support imprudent lending that inevitably leads to financial crises.  Pressing policies that impede lending are unpopular and are only considered in the aftermath of financial events.  Over time, these measures will be diluted and repealed.  Greenspan supported the repeal of Glass-Steagall and opposed the CFTC’s attempt to gain regulatory control over the swaps market.  Although these measures might have reduced the magnitude of the 2008 Financial Crisis, the bipartisan support for Fannie Mae and Freddie Mac (both bodies opposed by Greenspan) made the mortgage crisis unavoidable.  Greenspan believed that it was better to allow the bubble to inflate and clean up the “debris” in its wake.  That isn’t an optimum policy but probably the only one that is politically feasible.[6]

Inflation targeting leads to asset inflation:  As early as 1993, Lawrence Lindsey, a Fed governor, pointed out to the FOMC that focusing solely on inflation control has the potential side effect of creating asset bubbles.[7]  Lindsey observed that inflation was falling due to globalization (and not due to Fed policy).  We would add deregulation as well.  If inflation is low, the central bank could be lured into keeping policy accommodative, potentially leading to asset bubbles in equities, housing and fixed income.  Greenspan mostly ignored Lindsey’s concerns; Mallaby speculates that the Fed Chair realized that keeping goods prices in check was politically acceptable but restricting wealth would not be tolerated.  Essentially, if some future Fed chair wants to tighten policy ostensibly to deflate an asset bubble, he will have to come up with an inflation narrative to do so.  Consequently, monetary policy in an era of globalization and deregulation will tend to support asset prices and increase the odds of asset bubbles.

What do these insights tell us?  In a world that is globalized and deregulated, financial markets will have a bullish bias because monetary policy will be persistently accommodative.  If President-elect Trump signals an end to globalization and perhaps the unencumbered introduction of new technology, inflation targeting will become less friendly to financial markets.  Still, there is no evidence to suggest that the Fed will no longer face pressure from the White House for easy money, not rescue financial markets from volatility or ever target asset prices in setting policy (at least consistently and overtly). 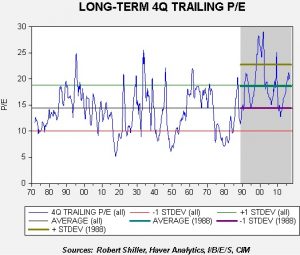 Our conclusions from Mallaby’s work tend to confirm prior comments we have made about S&P 500 P/Es.  This chart shows the trailing P/E for the S&P 500; for the current quarter, we use a mix of three quarters (Q1, Q2, Q3) and consensus forecasts for Q4.  The area in gray, which encompasses the period from 1988 to the present, has seen an upward shift in the P/E.  Essentially, the lows recorded in this period are closer to the average observed over the entire time frame.  Investors appear to have shifted their risk tolerance and are willing to “pay up” for earnings.  Part of the reason why this shift occurred could be contained in the above analysis of monetary policy.  The combination of expectations of central bank “rescues” from market turbulence and policy accommodation stemming from inflation targeting in a globalized economic environment may have given investors more “courage” about accepting a higher earnings multiple than seen in the past.  Thus, the current P/E, though historically elevated, may not be all that risky…as long as the monetary policy environment doesn’t change.

[2] Ibid.  Greenspan disputed Mallaby’s claim that the former was responsible for letting Burns know how he could get the rumor squelched, pp. 141-144.  Mallaby stands by his position.