Last week, we updated our thoughts about a melt-up in equity markets.  We observed that retail flows had diverged from equity market performance and noted that if sentiment shifts and retail investors come into equities, the market could rise rapidly to levels that may not be sustainable.  This week, we are dealing with the opposite problem—a potential “black swan” from the Wuhan virus and the subsequent decline in risk assets.

The Wuhan virus is a coronavirus that recently emerged in the Chinese city of Wuhan in the Hubei province.  It likely originated in wild animals and “jumped” the species barrier to become a human infection.  Since the virus is evolving rapidly, we won’t cover the details of the disease in this report.[1]  In this report, we will discuss how the virus could affect financial markets and how investors should handle it.

Pandemics[2] can have lasting and significant effects.  The Black Death, transmitted by a flea-borne bacterium, killed about 25% of the world’s population.  The subsequent population reduction led to a 3.5x jump in real wages in Britain from 1310 to 1450.[3]  However, modern medicine has tended to reduce the economic impact of pandemics.  The worst influenza pandemic, the Spanish Influenza of 1918, infected 500 million and killed up to 100 million globally.  The economic impact was notable but rather short; within a couple of years, the U.S. economy had recovered. 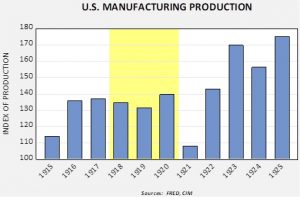 The Spanish Influenza is shown in yellow.  The pandemic did have an impact on output but was dwarfed by the post-WWI recession of 1921.

The current situation is being compared to the SARS epidemic of 2003, which mostly affected China.  Using data from Capital Economics,[4] the disease clearly had an adverse effect on the Chinese economy. 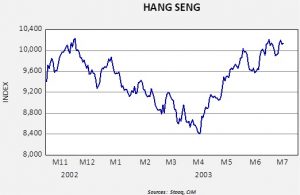 If this event follows roughly the same pattern as SARS, then Chinese equities could see a 15% decline.  It should be noted that SARS was first detected in November 2002 but was not reported to the WHO until February.  Beijing is acting much faster this time around so the timing could be compressed.  It is also important to note that by June the Hang Seng had recovered most of its losses.  Such recoveries are typical from these events.

What should investors take from this analysis?  First, these sorts of events usually have a three- to five-month period during which they have a significant impact on financial markets.  There is always fear that this one will be different and it is possible that it will be.  But, more than likely, the Wuhan virus will peak in the next six weeks and the recovery will start.  Second, it’s important to note that the operative factor affecting financial markets from this virus is fear.  The CDC estimates that between 291k to 646k die each year from influenza.  If the world has 8k cases of the Wuhan virus and a 10% lethality rate (which would be roughly in line with SARS), then we are looking at about 800 fatalities worldwide, with the majority in China.  That is notable but far less than the number of likely fatalities from influenza this year.  Still, the element of the unknown will tend to lead markets to overshoot to the downside which may open opportunities for a recovery in the spring.

[2] Pandemic is an epidemic with global proportions.

[3] Scheidel, W. (2017). The Great Leveler: Violence and the History of Inequality from the Stone Age to the Twenty-First Century. Princeton, NJ: Princeton University Press, p. 303.