The consensus estimate for Q4 2016 S&P 500 operating earnings growth is 3.2%, which translates into a forecast of $118.35 per share for the S&P 500, using Thomson/Reuters data.  Using a similar growth rate, the Standard and Poor’s calculation of operating earnings generates annual earnings of $102.16.  Simply put, these two sources currently have a rather wide divergence. 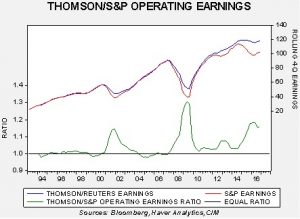 This chart shows the two series from 1994, with the lower line showing their ratio.  The official explanation for the divergence is that S&P earnings are closer to Generally Accepted Accounting Principles (GAAP), which usually don’t include “unusual items.”  The Thomson/Reuters earnings data excludes more of these non-recurring costs, resulting in higher operating earnings.

What concerns us about the current divergence is that two of the past divergences occurred during recessions.  Thus, it is possible that the recent event is signaling that a downturn could be coming.  However, we have also noted that another factor may help explain the widening—oil prices. 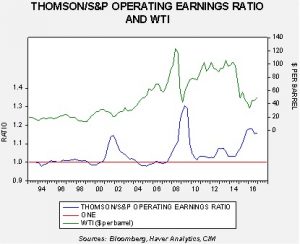 This chart overlays the ratio of the two earnings series with oil prices.  Note that the three major divergences coincide with significant declines in oil prices.  It is not unusual for recessions to bring lower oil prices; however, oil prices can fall for other reasons, as we have seen since 2014.  This means that with the recovery in oil prices, we could very well see a narrowing of the ratio between the two series.

To the extent that the markets usually focus on the Thomson/Reuters data, a narrowing of the ratio won’t matter too much.  The growth in earnings as reported by S&P could be quite robust next year whereas the growth already estimated by I/B/E/S[1] of about 10.6%, while impressive, won’t be as strong as S&P if the ratio approaches one.  That would entail a greater than 29% rise in what S&P reports.  Still, convergence of the two series does give us more confidence in the veracity of the earnings data.

[1] A part of Thomson/Reuters.