One of the risks we noted in the 2020 Outlook: Storm Watch was the potential for a “melt-up.”  On the one hand, seeing a parabolic rise in equities seems like a positive.  On the other, a rise of significant magnitude only occurs because of a surge of late buyers; these latecomers usually suffer large losses and become something of a cautionary tale for future investors.  The decline in equities that follows a melt-up is usually large too, more than it would have been had the rally not occurred.

The idea of the melt-up is due to the fact that equities have been rising with little evidence of strong retail participation. 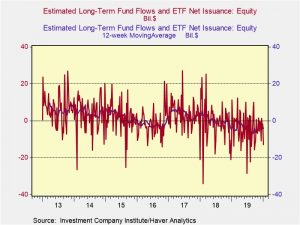 This chart shows weekly flows into mutual funds and equity ETFs.  We have added a 12-week average through the data.  On average, flows into equities have been negative since May 2018.  A similar calculation for bond funds shows strong inflows since last January. 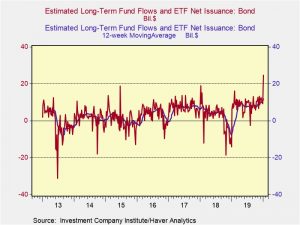 On a longer-term basis, the recent divergence between retail flows into equities and the S&P 500 is notable. 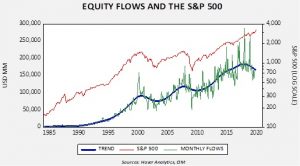 On this chart, we overlay the S&P 500 along with monthly flows into equities from retail mutual funds and ETFs.  We have generated a trend line in the data to show the underlying behavior of this series.  The divergence became an outlier in late 2017 and, since then, the index has continued to rise with falling retail flows.  Why is this happening?  The continued rise in equities is clearly coming from institutional buyers.  Some of the lift might be due to a falling level of equities themselves.  The S&P 500 divisor, which takes into account buybacks, mergers and new entrants into the index, has been declining since 2010.  With fewer stocks available, the same level of liquidity can lead to higher prices.  Still, even buybacks cannot fully account for this divergence.

Our fear is that if retail investors decide that missing out is too painful, the influx of liquidity could send prices up strongly.  At this point, there is little evidence to suggest this is happening.  Not only are flows depressed but retail liquidity remains elevated. 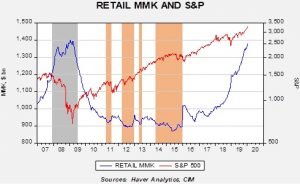 Retail money market levels are similar to where they were during the Great Financial Crisis.  When the equity markets began to recover in 2009, the levels of money markets declined, helping fuel the recovery.  Although this level of liquidity may exist as a hedge against uncertainty, if confidence rises, there are ample resources for a strong rally in stocks.  Again, as we said earlier, there has been little evidence that sentiment is becoming bullish, but, if it does, the melt-up we discussed in our Outlook is more probable.