After a short foray into emerging markets, we exited that position in our latest allocation.  Prior to the Trump victory, we had expected the dollar to weaken which would have supported emerging markets.  However, the dollar’s resurgence is a bearish factor for emerging markets, leading the Asset Allocation Committee to look elsewhere for return. 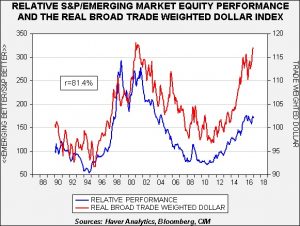 The blue line on this chart looks at the relative performance of emerging markets to the S&P 500.  When the line is rising, the S&P is outperforming emerging markets.  The red line is the JPM real dollar index.  The two series are positively correlated at 81.4%, meaning that a stronger dollar tends to support the S&P relative to emerging markets.

Although the dollar is richly valued based on most currency valuation models, we believe that two factors will tend to support continued strength.

Eventually, the dollar will rise to a level that will fully offset the impact of relatively tighter monetary policy and changes in fiscal and trade policy.  Although an exact level is difficult to determine, we would expect the JPM dollar index to rise to levels of past bull markets. 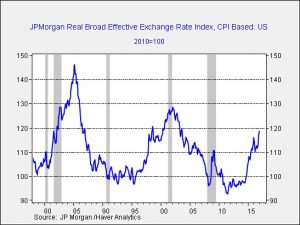 To reach levels seen in the 1995-2001 bull market, the dollar index should rise about another 10%.  We doubt we will reach the highs of the Volcker dollar bull market (which would entail another 20% increase from current levels), but we would not be surprised to see a level between the two bull phases.  Such a rise will pressure emerging market equities.

Finally, it is worth noting that the 1982 Mexican Debt Default and the 1997-99 Asian Economic Crisis occurred during rising dollar markets.  Dollar strength tends to weigh on commodity prices, which often are produced by emerging market nations.  In addition, emerging market nations and companies often borrow in dollars at lower interest rates relative to domestic rates.  A rising dollar raises debt service costs and increases the odds of default.

Thus, for the time being, we intend to forego a position in emerging markets.  However, once the dollar bull market is exhausted, emerging market equities could become attractive.