Whenever we make a forecast, as part of the process, we look for factors that could lead us to be wrong.  In the original 2018 Outlook, we focused on a number of factors, including an unexpected recession, excessive monetary policy tightening, etc.  In our 2018 Geopolitical Outlook,[3] we added other events that could adversely affect this forecast.  In this report, we will focus on another factor that could lead to forecast variance.

One of the goals of the tax bill is to boost investment.  The focus on investment does make sense; since the early 1980s, investment levels relative to GDP have been falling with each expansion. 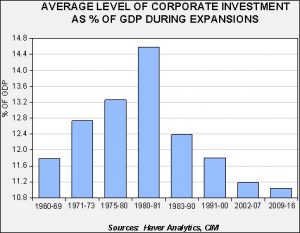 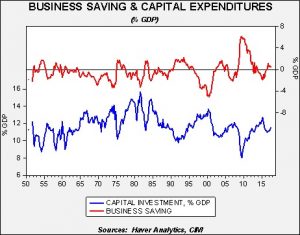 Cutting corporate tax rates could lift investment if there was a lack of available liquidity because cutting tax rates should lift the level of cash available for investment.  However, there is little evidence to suggest a liquidity shortage.  First, as seen above, flows into business saving have been rising.  Second, cash and near-cash holdings of non-financial corporations is relatively high and well above the trough level seen since 1980. 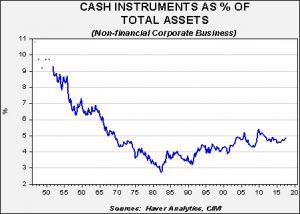 Third, and perhaps even more telling, is that commercial and industrial (C&I) loan growth is at a level associated with recession. 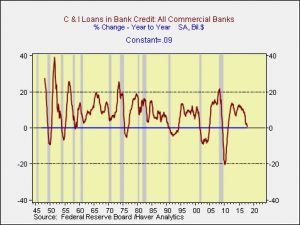 The current yearly growth of C&I loans is +0.09%; in the past, this level is usually observed either when the economy is in recession or shortly after one has ended.  In no period during the postwar experience has C&I loan growth been this weak without being associated with a recession.  The reason that slowing C&I loan growth affects the economy is that when commercial banks begin cutting back on loans, it usually lowers investment; at the same time, commercial banks tend to be cautious and don’t begin restricting lending until it is abundantly clear that the economy is weakening, thus making this indicator mostly a lagging one.  Lending surveys from the Federal Reserve do not suggest senior loan officers are tightening credit.  Thus, we conclude that the drop in lending is probably a function of falling demand for the loans—simply put, businesses don’t need the liquidity and aren’t borrowing for the current level of economic activity.

As a result, the corporate sector, which has ample liquidity and isn’t borrowing, is about to get even more liquidity pushed its way.  The key issue is most likely a lack of aggregate demand.  In other words, the economy isn’t growing fast enough to trigger an expansion of the capital base.  Thus, unless other parts of the tax law encourage economic growth, the economic impact from the tax cuts will likely be rather small.

However, the financial impact could be significant.  Expanding corporate liquidity will likely encourage higher dividends, share buybacks and merger activity.  Given the expected boost in earnings from the tax cuts, the expansion of corporate liquidity and the anticipated response from corporations to reward shareholders should support the continued elevated multiple and perhaps even lift investor sentiment further.