The Commerce Department recently released its first iteration of Q4 GDP.  The overall growth rate, at 2.1%, was mostly on forecast but the composition of the growth showed some unexpected developments.  In this week’s report, we will examine the most interesting changes and what it may be telling us about future economic activity.

To analyze the data, we focus on a set of statistics called “contributions to GDP growth.”  These datapoints show how much various parts of GDP contributed to overall growth.  Here is a chart of the data. 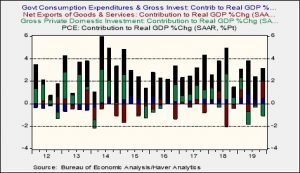 The largest positive contributor to growth was net exports; although it is not unprecedented, outside of recessions, net exports are usually a drag on growth.  It is important to note that this data is looking at the rate of change of the change, so a smaller deficit will contribute positively to growth.

Net exports are the sum contribution of gross imports and exports.  Usually, during expansions, the contribution from gross imports is negative.  But, during recessions or when growth falters, imports fall and contribute positively to growth. 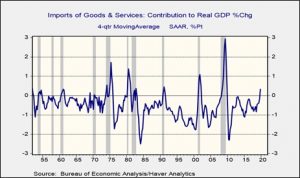 This chart shows the four-quarter moving average of the contribution of gross imports to GDP.  A positive contribution tends to be consistent with recession.  So, is that the case this time?

It might be, but there are two reasons why this event might be a false positive.  First, the trade wars have probably had some impact on reducing imports.  Since WWII, the general trend in tariffs has been downward.  The recent reversal in this trend is a new factor that may be shifting consumption to domestic goods and away from imports.  In some respects, this is the goal of the administration’s trade policy.  Second, there is evidence that U.S. firms accumulated inventories in the months prior to the Phase One trade deal with China.  This was likely done to buy goods that might be the target of future tariffs.  As a deal was made, it would make sense for firms to reduce inventories.  The act of selling down inventories would reduce imports. 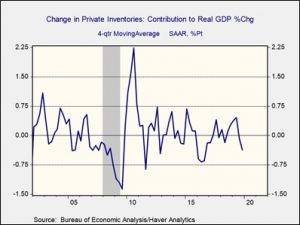 We will be watching the gross import data with great interest this year to see if (a) we are seeing a structural change in the economy where imports decline, or (b) we are on the cusp of a recession.  For now, the most likely explanation is that the swing in gross imports was affected by trade policy uncertainty.  But, if other economic data begins to corroborate the recession signal from gross imports, we would recommend that investors reduce portfolio risk.