Although our current allocation models exclude emerging markets, we still monitor various emerging market nations for potential opportunities.  A country that has been in the news recently is Mexico.  President Trump has been targeting Mexico and the North American Free Trade Agreement (NAFTA) for Mexico’s persistent trade surpluses with the U.S. 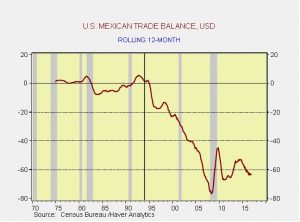 This chart shows the rolling 12-month trade account with Mexico; the vertical line on the chart shows the month when NAFTA was enacted.  As the chart clearly shows, the trade deficit with Mexico has widened significantly, although it is interesting to note that it hasn’t worsened since the last recession.

Trade deficits act as a drag on GDP; the tradeoff is microeconomic.  Imports tend to improve the competitiveness of an economy. 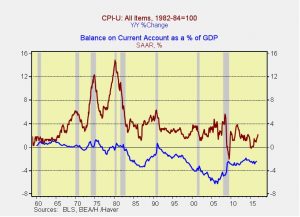 Until the 1980s, the U.S. tended to run modest current account surpluses.[1]  Note that inflation steadily declined after 1980.  From 1960 to 1980, inflation averaged 5.1%.  From 1980 to the present, it has averaged 3.3%, and since 1990, 2.1%.  Competition from foreign trade forces domestic firms to be more competitive and cost efficient.  At the same time, since the U.S. provides the reserve currency, there is an incentive for other nations to implement policies designed to run trade surpluses with the U.S. in order to acquire dollars.  These policies tend to suppress domestic consumption and expand investment, with the global effect of boosting growth through trade.

The peso/dollar exchange rate has a strong impact on the performance of investments into Mexico.  Currently, our model of the exchange rate suggests the peso is deeply undervalued. 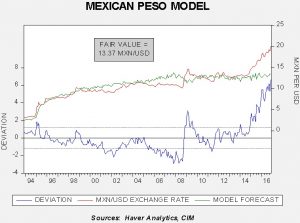 This model uses relative inflation and the trade account as independent variables.  It suggests the peso is 33% undervalued relative to the dollar.  Note that this undervaluation began in mid-2014 as the dollar began to rise across most currencies due to expectations of U.S. monetary policy tightening.  The peso weakened further due to the election of Donald Trump, who promised to build a wall across the southern border of the U.S.

Although the peso is quite competitive with the U.S. at current levels, the degree of political risk is so elevated at present that we are not ready to allocate to Mexican equity markets.  However, at some point, the currency should stabilize and offer an opportunity for our asset allocation accounts.  Until then, we continue to closely monitor this market.