Emerging market equities have been the best performing asset class year to date among the 12 we use in our asset allocation program.  Given that we currently have no exposure to emerging markets, it makes sense to review this market stance.  The U.S. dollar is one of the key variables impacting the relative performance of emerging markets to the S&P 500. 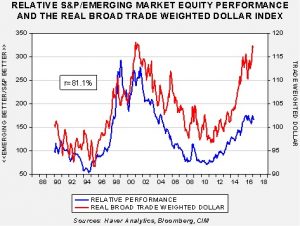 It is worth noting that for the past few months both the dollar and the emerging markets/S&P ratio have been mostly range-bound.  Only since the Trump victory has the dollar broken out to the upside.  The lack of performance from the U.S. market relative to emerging markets may be signaling that equity investors don’t believe the dollar’s strength will be maintained.  The breakout is based on two expectations.  First, the FOMC will tighten credit further.  Although we do expect this to occur, it is also well anticipated.  Second, the Trump administration has promised fiscal stimulus in the form of infrastructure and defense spending, coupled with tax cuts.  In the past, fiscal stimulus has led to tighter monetary policy which will likely boost the dollar.  In addition, if President Trump implements trade impediments, the dollar will likely strengthen as well.

It is possible that some degree of doubt has developed about the likelihood of fiscal stimulus.  It is rarely remembered that new presidents take some time to assemble a team and work with Congress on getting new laws passed.  As the above chart shows, the last dollar spike in 2000 didn’t lead to a new high in the equity ratio.  Perhaps equity investors concluded that the greenback was probably near the end of its bull run.