Last week, we discussed the impact of the growing fiscal deficit on the economy and markets.  We did note that fiscal deficits have tended to weaken the dollar.  This week, we want to expand on that analysis.  To start, we note that fiscal policy does not operate in a vacuum.  To measure the combined effect of monetary and fiscal policies, we added real fed funds (fed funds less yearly change in CPI) and the fiscal deficit as a percentage of GDP to create a policy proxy variable.  Real fed funds offset the impact of inflation and scaling the fiscal account to GDP shows the relative effect of fiscal policy. 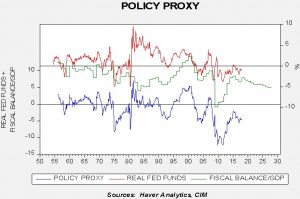 The lower line of the chart is the sum of the upper two lines on the chart.  The thesis is that policy is stimulative when the lower line is rising. 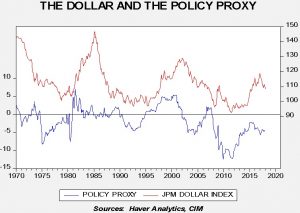 This chart shows the policy proxy with the JPM dollar index.  The pattern seems to be that the dollar appreciates when policy tightens with at least a two- or three-year lag.  The “Volcker dollar” rally in the early 1980s was due to the combination of very high interest rates and rising fiscal deficits.  The dollar bull market from 1995 to 2002 was due to the combination of rather tight monetary and fiscal policies.  The most recent bull market, surprisingly, was tight fiscal policy (especially in light of the sluggish economy) and rather easy monetary policy.

The first chart shows the Congressional Budget Office’s estimate for the future deficit.  If the FOMC does not significantly tighten monetary policy in the coming months, it looks like the dollar could come under pressure.  Obviously, if we were to get a repeat of Chair Volcker’s monetary policy, we would be bullish on the greenback.  However, we strongly doubt monetary policy will be that tight.  After all, real fed funds approached 10% in 1991.  And, if the economy were to weaken, the fiscal deficit would widen more than expected due to the automatic spending that comes from higher unemployment insurance and other income support and the lower revenue for falling tax receipts.

Given the dollar’s current parity overvaluation, as we discussed earlier this month,[1] the current fiscal expansion and continued accommodative monetary policy have the potential to exacerbate the weakening dollar.  A weak dollar is bullish for foreign equities and commodities, and usually boosts large capitalization stocks relative to small capitalization stocks.  The policy proxy is also suggesting steady headwinds for the dollar in the coming years.  Given how rarely changes occur in fiscal policy, we don’t expect major changes on that front anytime soon.  Although monetary policy will likely tighten, it will take significant increases in the fed funds target to offset the overvaluation noted in the parity analysis discussed in an earlier report and the widening fiscal deficit.  Thus, we look for dollar weakness to be a factor this year and into 2019.