The World Economic Forum in Davos was held recently and various comments were made about the dollar during the meetings.  Treasury Secretary Mnuchin seemed to imply that the administration was talking the dollar lower, a violation of unwritten protocols that make it acceptable to have a weaker currency in support of growth but improper to use depreciation to give a nation an advantage on trade.  Later, President Trump seemed to contradict his treasury secretary, suggesting the dollar should strengthen.  This led the financial media to deploy a parade of currency analysts to try to explain the dollar’s behavior.  The cacophony of comments did little to explain market action.

Our position on exchange rates is that there is no single valuation method that works consistently.  In our over 30 years of monitoring and analyzing exchange rates, we have found they are usually characterized by regimes.  During some periods, trade balances drive exchange rates.  In other periods, interest rate differentials are the key factor.  Relative growth rates or productivity have also been relevant.  But, in the long run, the oldest valuation method, purchasing power parity, remains useful for investors.

Purchasing power parity assumes that exchange rates bring equilibrium to relative prices.  In other words, if price levels in one nation are higher compared to another nation, the country with higher price levels will experience currency depreciation until price levels equalize.  In practice, the ratio of price levels isn’t perfect—not all goods in a price index are tradeable, inflation indices between countries are not identical and no markets are frictionless, so adjustments can take time.  But, what we find in practice is that when the exchange rate deviates widely from the ratio of inflation rates (or, purchasing power parity), the exchange rate usually adjusts.

These are exactly the conditions we have seen recently. 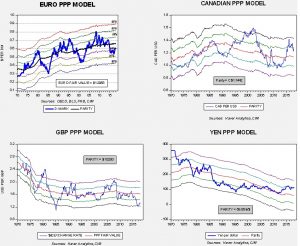 This chart shows our calculation of purchasing power parity for the euro (based off the D-mark at euro parity and German inflation), the Canadian dollar, the British pound and the Japanese yen.  In all cases, the dollar is highly overvalued.  What we find missing in most comments about the dollar that we see in the financial media is that the dollar is weakening in response to overvaluation.  All these charts show that key market signals come at extremes.  As exchange rates approach the standard error lines, they become vulnerable to reversals.  And, when reversals occur, it is not uncommon for the exchange rate to move to an opposite extreme.  This likely means that the dollar will continue to weaken for an extended period.

In response, our asset allocation has added foreign equities. 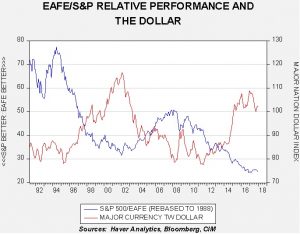 This chart shows the S&P and EAFE equity indices, denominated in dollars.  We have rebased the two to 1988 and calculated a ratio of the indices.  We have also added the Federal Reserve’s major current index.  When the dollar is strengthening, U.S. stocks tend to outperform.  When the dollar is elevated and reverses, it is usually favorable to foreign equities relative to U.S. equities.

In general, both indices tend to be closely correlated.  As a result, shifting to overseas stocks doesn’t mean that domestic equities are expected to decline.  Instead, it suggests that the tailwind of a weaker dollar boosts the relative value of foreign stocks to a U.S. investor.  That is the rationale for our current allocation.