A regular question we are asked by financial advisors and clients is, what is the impact of the Trump presidency on financial markets?  The simple response is that we don’t know for sure, but a pattern is starting to emerge.  And that pattern has to do with the perceptions of Trump’s two main constituencies.

President Trump has two primary constituencies, the right-wing populists (RWP) and the right-wing establishment (RWE).  The primary goal of the RWP is to create a surfeit of high paying, moderately skilled jobs.  History suggests that these jobs are often created in the manufacturing sector, so policies are being promoted that protect and expand these positions.  In general, policies favoring trade protection, immigration restrictions, infrastructure spending and the support of incoming foreign direct investment are being discussed.  In addition, protection for entitlements, especially the universal ones (those that are not granted due to means testing or favor a specific group) such as Social Security, Medicare and Disability, are favored.  There is little concern for fiscal deficits.  The RWE, on the other hand, prefer tax cuts, deregulation, entitlement reform and lax immigration policies.  Infrastructure spending is opposed and concern about fiscal deficits is high.

The problem the president faces is that there isn’t much overlap between the policy preferences of these two groups.  That isn’t to say there isn’t any overlap.  The House GOP is trying to build support for its corporate tax reform by including a border adjustment tax that would leave revenue from exports untaxed while taxing the revenue derived from imports.  The border adjustment tax, in theory, would be attractive to the RWP due to its impact on trade.  At the same time, it would lift revenue and partially pay for corporate tax cuts.  But, for the most part, policies that the RWE want will not be backed by the RWP and vice versa.

So far, equities and the dollar have risen when policies championed by the RWE appear to be advancing.  Gold, commodities and Treasuries perform better when the president seems to be supporting the RWP policies.  Lately, most of the policy direction seems to be favoring the RWE.  This is because more members of the cabinet being approved are coming from the GOP establishment.  It is unlikely this pattern will continue indefinitely; we would expect Trump to vacillate between the two groups in order to stay in power.

However, at some point, the financial markets will determine where the president’s priorities lie.  If it turns out he is truly a populist, inflation expectations will rise, which will likely be bearish for equities and fixed income markets.  If the Federal Reserve remains independent, under these conditions, the dollar will rally while commodity prices will suffer.  On the other hand, if the U.S. central bank’s independence is compromised, commodity prices will rise and the dollar will fall.  If Trump turns out to be an establishment figure at heart, equities will perform well, interest rates will rise modestly and the Federal Reserve will remain independent.  We would not expect a runaway bull market in any asset class.

Is it possible to know when the financial markets make this determination?  In reality, it behooves the president to maintain enough strategic ambiguity to keep both sides on board.  But, history does offer some guidance.  So far, the S&P 500 Index is tracking the path usually seen with new GOP presidents. 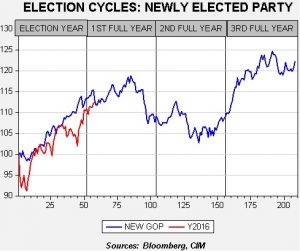 The blue line on this chart takes the average weekly performance of the S&P 500 Index rebased to the first Friday close in the election year of a new Republican president until the next presidential election year.  The data begins in 1928.  Note that performance for last year and this year mostly follows the historical average pattern.  If this situation continues, the S&P 500 Index will reach the 2375-2400 level by late Q3.

The drop seen in the average at the end of the first full year could represent disappointment in the ability of a Republican president to actually deliver the policy changes promised during the election.  In other words, a degree of realism develops which leads to a correction in equities.  Again, this analysis is simply an average and, if anything, the current president is clearly unique.  However, if the financial markets conclude that Trump is mostly a populist, it would not be surprising to see equities pull back.  Thus, for now, we remain confident that equity markets will continue to trend higher.  This position could be tested later this year.