Do fiscal deficits matter?  This is one of the more polarizing topics in economics.  The recent tax bill and budget agreement will increase the deficit, which has led to all sorts of worries and claims.  Here are a few observations:

Do deficits matter?  Yes, but not in the simple form that pundits suggest.  When the government spends more money than it takes in from taxes, that saving has to be acquired from the other major sectors of the economy, the private sector (households and businesses) or the foreign sector (through the trade account). 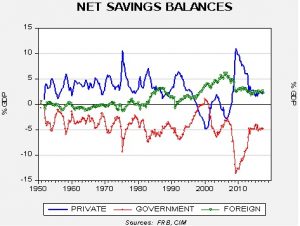 The above chart shows the three sectors of the saving balance; it’s a macroeconomic identity, meaning that it will always equal zero.  Thus, when the government deficit expands, it must be funded by saving created by either the foreign sector or the private sector.  When the government runs a surplus, it depletes private sector saving or reduces foreign inflows.

The impact on the economy depends on the return from government spending relative to the return from the private sector or the foreign sector.  If public spending has a higher rate of return than investment in the private sector, then fiscal deficits are reasonable.  However, this calculation is extraordinarily difficult.  Think of the rate of return on the Strategic Petroleum Reserve; if the world experiences a major war in the Middle East and oil rises to $150 per barrel, the investment when oil was cheaper would almost certainly be positive.  The same would be true for peacetime defense spending when war breaks out.  However, outside of dire situations and under shorter time frames, private sector investment probably has a higher rate of return.

Our concern is the market impact.  The classic fear is that deficits trigger inflation and higher interest rates.  The theory is that if the government runs a deficit, the private sector will offset it, which will require a drop in consumption and crowd out private investment.  The drop in consumption is usually facilitated by higher prices and the contraction of investment would usually constrain output and lift inflation as well.  The data actually shows that higher deficits did seem to boost interest rates from the late 1950s into the early 1980s; however, the relationship became uncorrelated thereafter. 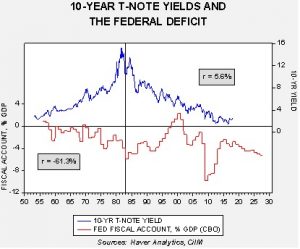 Since 1983, long-duration Treasury rates have steadily declined despite the trend in the deficit.  In comparison to the first graph, what changed in 1983 was the expanding current account deficit, which brought in another source of saving to fund the fiscal deficit.

One area that will likely be affected is the dollar.  The dollar was mostly uncorrelated with the fiscal balance until the peak of the “Volcker dollar” in 1985.  However, since then, with a two-year lag, the fiscal account correlates directly with the dollar at a level of 70%.  A fiscal surplus tends to be dollar bullish, while a widening deficit is dollar bearish. 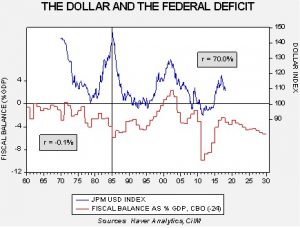 We believe this occurs because of the dollar’s reserve status.  There is a constant demand for dollars on world markets to facilitate trade.  A wider fiscal deficit makes more dollars available for world markets; rising supply tends to weaken the dollar’s price, the exchange rate.  On the other hand, a fiscal surplus (or narrower deficit) means the supply of dollars is less, boosting the exchange rate.

Although it is possible that a weaker dollar could lift prices, the evidence is scant; foreign countries use exports for growth and to lower unemployment in their nations. As a result, they tend to accept margin compression rather than give up market share through higher prices.  Accordingly, we think the preponderance of the evidence suggests the expanding fiscal deficit will be dollar bearish and supportive for foreign assets.

[1] Usually the party out of power, but not always.  There are a few political figures that are consistently opposed to deficits and government debt regardless of whether or not their party is in control of Congress.

[2] In public finance, a public good is a good that cannot be easily excluded and is non-rivalrous, meaning that it is either provided to all or none.  Fire protection cannot be easily segregated, for example.   In theory, one could argue that the fire department should only put out fires from households that pay their “fire bill.”  In reality, it is probably impossible to allow one house to burn down and not adversely affect neighboring homes who did pay their fees.  Police services, libraries, etc. are examples of pure public goods.  If the government or a non-profit entity doesn’t provide the good, no private sector firm will provide it because it cannot ensure it will get paid (getting back to the government’s ability to use coercion to collect taxes).  Quasi-public goods are goods that can be provided by the private sector but is sometimes provided in less quantities than considered optimal.  If households don’t earn enough to provide for the wellbeing of a family, a quasi-public good would be public assistance.  The private sector does provide food and shelter but it may not produce enough to be a feasible option for a low income household.