The data on U.S. residential real estate has been improving in recent months.  Housing tends to have an outsized effect on the economy.  Not only do housing purchases trigger follow-on buying of consumer durable goods (e.g., furniture and furnishings, etc.) but non-durables as well (e.g., basic household items).  A house is an asset and there is a wealth effect that affects future spending as well.  The direct impact on GDP is rather modest; the average contribution to GDP from residential real estate is only 0.08% per quarter.  However, there is evidence that a weak housing market has been a precursor to recession. 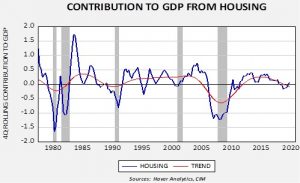 This chart shows the four-quarter rolling contribution to GDP from residential real estate.  We have applied a Hodrick-Prescott Filter to the data to establish the underlying trend.  Since 1980, with one exception, a negative reading on the trend has been a warning of eventual recession.  The only exception was the 2001 recession which was an unusually mild downturn.  In Q1 of last year, the trend indicator turned negative.  Although it can take a long time from signal to recession (it turned negative in Q1 2005, for example), it has been a reliable signal of economic weakness.  However, some housing indicators have shown notable improvement recently, which may lead to the trend rising later this year.  Here are a couple indicators we are watching. 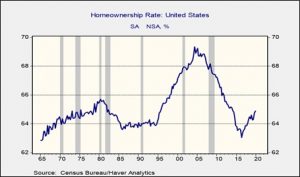 In 1995, the government began to aggressively support home ownership.  Credit restrictions were eased, and refinancing was encouraged.  The home ownership rate peaked at 69.3% of occupied homes in 2004.  The housing crisis led to a collapse in this metric, reaching a trough of 63.1% in 2015.  As the chart shows, the homeownership rate has been rising rapidly since, reaching a new cycle high of 64.9%.  The rise in home ownership rates has increased the most among households earning less than median family income. 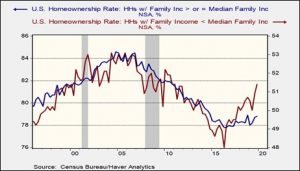 Although there is a potential credit quality issue with less affluent home buyers, the rise should be supportive for economic growth.

The only “fly in the ointment” has been that home prices have been rising rapidly.  Although it hasn’t adversely affected affordability due to low mortgage rates, it will make the housing market increasingly sensitive to interest rates. 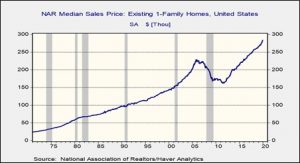 Ideally, rising prices for existing homes should spur new building.  Housing starts are beginning to accelerate, which is a good sign.  If housing continues to accelerate, our estimates for GDP this year may be overly conservative.