For better or worse, the Federal Reserve tends to conduct policy based on some variant of the Taylor Rule, which essentially means that the FED sets the policy interest rate based upon changes in the inflation rate and the level of slack in the economy.  The rule suggests that if there is little available capacity in an economy, continued growth will lead to higher inflation, as such, tighter monetary policy is necessary to bring inflation back to target levels.  On the other hand, if slack exists, rising growth is less of an inflation risk and the central bank can avoid rushing to raise interest rates.

The hard part of this approach is measuring slack.  Some models, including the one John Taylor created, use the difference between GDP and potential GDP to measure slack in the economy.  The problem is that potential GDP can only be estimated, not measured.  Greg Mankiw created an alternative to the Taylor Rule using the unemployment rate as a proxy for slack.  We have expanded on Mankiw’s original idea by creating three other variations, one that uses the employment/population ratio, another using involuntary part-time workers as a percentage of the total labor force and a third using yearly wage growth for non-supervisory workers. 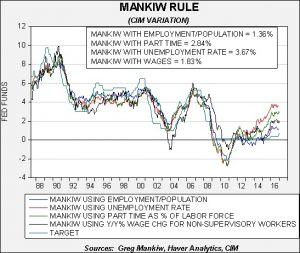 Using the different variations, the FOMC is either modestly behind the curve (the employment/ population ratio puts the neutral policy rate at 1.36%) or well behind the curve (the unemployment rate version puts the neutral policy rate at 3.67%).  The question for policymakers, in particular, and economists and strategists, in general, is which variation best reflects the level of economic slack?

This pair of charts offers an insight into what may be the best answer. 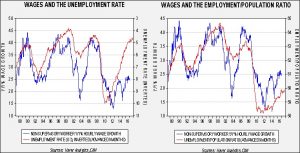 The chart on the left shows the relationship of wages to the unemployment rate, while the chart on the right shows the relationship of wages to the employment/population ratio.  From the late 1980s until the last recession, the two employment-related series generally tracked wages but they have diverged broadly in this recovery.  One of the mysteries of the recovery is the weakness in wage growth despite the low unemployment rate.  In fact, a simple model of the two suggests that wage growth should be 3.5% by Q3, well over the current 2.4%.  However, relative to the employment/population ratio, wage growth should only be around the current level of 2.4% by September, which is equal to current wage growth.

In other words, the employment/population ratio appears to be, at present, a better indicator of slack.  The low ratio suggests that the large number of those not working is somehow acting as a dampener on wages, meaning that, perhaps, the low ratio is either signaling to employers that they don’t have to bid up wages to attract workers, or telling employees that there are enough people looking for jobs to prevent them from asking for higher pay.

We know that anecdotal evidence is mixed.  Two articles from the Wall Street Journal show the divergence.  One headline reads, “Skilled Workers are Scarce in a Tight Labor Market.”[1]  A second says, “Higher Jobless Rate Suggests Economy has Room to Run.”[2]  Although we are sympathetic to the former article, the data seem to confirm the latter one.  In other words, there are regional and industry pockets where wages are being bid up due to the lack of workers.  However, on a national level, that doesn’t appear to be the case.  There is evidence that labor market mobility has declined[3] which may be leading to wider regional pay divergences, but overall the above analysis does tend to suggest that wage growth remains stifled and the employment/population ratio is probably a better measure of slack in the economy.

If this is the case, the Mankiw Rule version using the employment/population ratio is probably the guide to Fed policy.  This would imply that the FOMC does need to raise rates if it desires a neutral policy, but not much more than the three hikes expected this year.  Our analysis of the 10-year Treasury market suggests that, assuming current oil prices, inflation trends, German 10-year sovereign yields and the yen/dollar exchange rate, current yields have discounted a fed funds target of 1.75%.  If the FOMC does not raise fed funds to that level, long-duration assets may become attractive as the year unfolds.  Of course, part of the problem is that those other variables will likely not remain constant.  For now, we maintain our mostly negative view toward long-duration fixed income but acknowledge that the FOMC may not lift rates to levels projected by the markets unless wage growth rises.  In our estimation, for that to occur, the employment/population ratio must rise.