The rapid rise in longer duration Treasury yields since the presidential election has been surprising.  As of December 8, the 10-year T-note yield was approximately 2.40%.  Although President-elect Trump’s policies will probably be inflationary, it is still unclear how much of his arguably vague plans will get passed.  It is possible the FOMC will become more hawkish and we have seen some increase in rate hike expectations.[1]  Still, our 10-year T-note model is putting the fair value yield at 1.85%.  Assuming fed funds at 1.25% still only raises the 10-year rate to 2.20%.  Taking oil to $60 and assuming the 1.25% fed funds only raises the fair value yield to 2.27%.  Only when assuming steady oil, fed funds at 1.25% and German bunds at 1.25% (up from the current 33 bps) does the yield even reach 2.40%.  The current spike in yields can be best justified by assuming a significant jump in inflation expectations.

If the lifetime experience of inflation is important, then what is the most important age?  We estimate that 60 is a reasonable age; the average age of the Senate is 61 years, the current FOMC average is 62 and the average age of an S&P 500 CEO is 57.[2]  Simply put, it’s around the age of 60 that people come into power in politics and business.  We believe that their personal experiences color the expectations of any investor and so using 60 as an influential age makes sense. 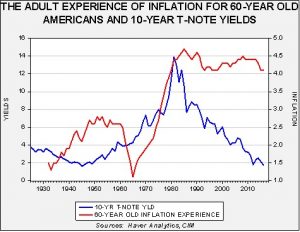 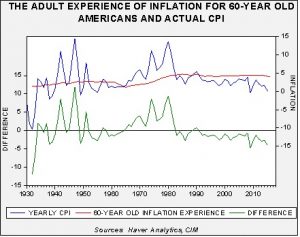 This chart shows the actual inflation rate compared to an average 60-year-old’s adult experience of inflation.  In general, bull markets in bonds tend to occur when the actual inflation rate is persistently below the average rate.  Bear markets happen when the opposite condition is in place.  Currently, the actual inflation rate is still well below the average rate, suggesting that the bull market in bonds should have more time to run.  However, our worry is that the average 60-year-old is unusually sensitive to inflation fears and thus may overreact to the incoming president’s policies.  In other words, inflation expectations may become unanchored rather quickly, forcing the Federal Reserve to turn unexpectedly hawkish.  Thus, we are taking a more cautious stance on fixed income into 2017, expecting higher yields and greater duration risk.  At the same time, we will be closely monitoring the economy in light of less accommodative monetary policy.  Most recessions occur because the Fed tightens too much.  We don’t expect that to become a problem until late next year or early 2018 if the Fed continues to raise rates.  So, for the upcoming year, we expect a weak fixed income environment.

[1] For example, the two-year deferred Eurodollar futures, which measure three-month LIBOR two years into the future, have jumped nearly 50 bps since the election.