The recent employment report was very strong, with payroll growth rising more than forecast and the unemployment rate declining more than expected.  One uncertainty that develops when labor markets tighten is the point at which wage growth begins to lift inflation. 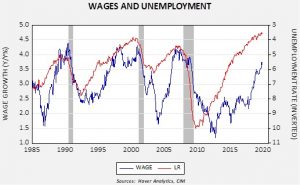 The reason wage growth remains modest is complicated, but a contributing factor is that the labor force continues to increase.  A key function in that process has been that citizens who were not part of the labor force have been steadily finding jobs.  The chart below shows the 12-month rolling total of those who have been out of the labor force and found employment.  This number has been increasing in this expansion. 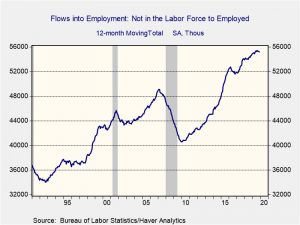 At the same time, the pace of these flows is beginning to slow.  If this source of new employees declines, in theory, it would tend to lift wages at an increasing pace until employment growth slows.  Nevertheless, for now, the labor market appears to be strong enough to attract new entrants into the labor force and employment, without excessive wage growth, which is a positive development for the economy.