After peaking at $2,063 in early August, gold prices fell to $1,760 at the end of November.  This is a notable decline and, because our asset allocation models have included precious metals since 2018, it makes sense to see if anything has changed.  We have several different ways to examine the price of gold.  In general, the outlook is mixed; the underlying fundamentals remain solid, but competition for investment flows is putting a damper on gold prices.

Based on our gold model, prices are attractive at current levels.  The model uses real two-year Treasury yields, the EUR/USD exchange rate, the balance sheets of the Federal Reserve and the European Central Bank, and the U.S. fiscal account scaled to GDP.  As the chart suggests, current prices are below the model’s forecast. 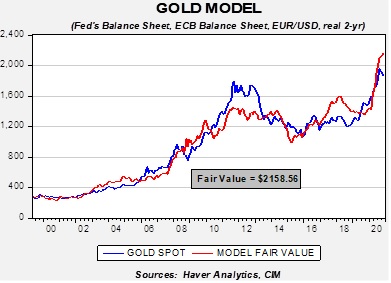 At the same time, a model based on the amount of gold held by exchange-traded products (ETPs) suggests gold isn’t attracting investment flows relative to its fundamental attractiveness. 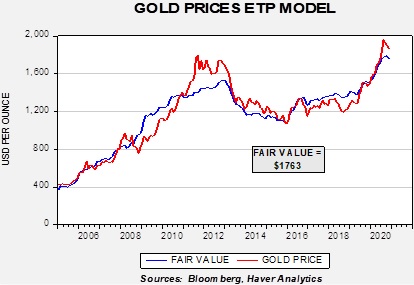 Although optimism surrounding equities is likely diverting funds that may have gone into gold, the price action in bitcoin may also be having an impact.  Bitcoin remains a controversial topic; its value appears to be ephemeral (in theory, one can create scarcity of anything, but it has little value without demand for it).  Its initial construction suggested it was a digital currency designed for transactions.  It has mostly failed in that endeavor, at least for legal transactions, but it has shown to have store-of-value characteristics.  As such, it has similar characteristics to gold without the same issues of storage.[1]  Recently, we have seen a sharp rise in bitcoin prices, which may be siphoning off demand that would usually go to gold. 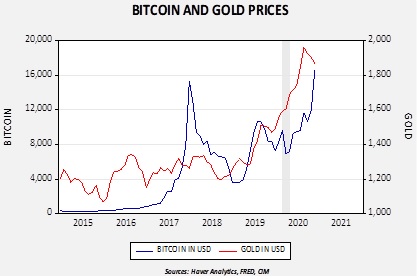 Since late 2014, gold and bitcoin prices are positively correlated at the 70.9% level.  In 2017, we saw a spike in bitcoin that collapsed.  The key question is whether we are seeing a repeat in the current situation or something different.  It is difficult to tell, but the most likely situation is that bitcoin isn’t replacing gold but is a complement.  Currently, bitcoin appears a bit expensive compared to gold (a simple model suggests bitcoin should be closer to 12,000), but it had been running below gold for most of this year.  Thus, we view the recent rally as more corrective in nature, although the recent spike suggests bitcoin is now excessively valued.  Another item of note is that when we had a financial crisis in February into late March, bitcoin plunged while gold maintained its value.  The financial system was in a perilous position in late Q1 and bitcoin was not the safety asset of choice when there were high levels of fear.  At the same time, we cannot discount the attractiveness of bitcoin and, if investable products are eventually created, it may have a place in portfolios.

Overall, we remain bullish on gold.  The underlying fundamentals, as shown in our base model, are very attractive and suggest current prices are undervalued.  We do think bitcoin has taken some of the luster from gold, but in the long run we believe the two assets are complementary.  With monetary and fiscal policy remaining expansive, the case for commodities, in general, and gold, in particular, is favorable.

[1] Both assets require storage, but one is quite physical whereas the other has, in theory, unlimited storage capacity.  For example, if one is trying to live in a failing state, gold may have little value due to its weight but a cryptocurrency that can be easily transferred is attractive.