Over the Thanksgiving holiday, news broke that a new variant of COVID-19 had been isolated in South Africa.  This new variant has an usually high number of mutations, which increases the likelihood that current immunity will be compromised.  In other words, prior infection or inoculation will probably be less effective in preventing infections.

Financial and commodity markets did not take the news well.  The major equity indices sold off.  Crude oil fell over 12% on the day after Thanksgiving.  It is still too soon to know the impact of this new variant.  Early comments suggest it may be less lethal than earlier variants.  That would be a pattern often seen with infectious diseases.  But there are reasonable worries that the new variant will have a disruptive effect on the global economy.

However, an added complication is the reaction of policymakers.  Last week, Chair Powell took a hawkish stance in testimony before Congress, suggesting that the Fed could taper its balance sheet purchases faster and may move to tighten policy before the labor markets fully normalize.  He also jettisoned the “transitory” description of inflation.

His statements led to a shift in market expectations over the path of monetary policy.   What changed for the Chair to move toward tighter policy?  As we discussed a few weeks ago, the composition of the FOMC next year will be much more hawkish unless the president moves quickly to fill the remaining three vacancies on the FOMC.  Without these vacancies being filled, Powell could face some close votes to keep policy steady.  His stance may reflect the fact that the committee’s composition is changing. 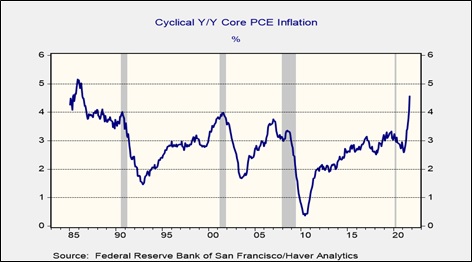 Until September, this index was still within its historic norms, but the rise since then suggests that (a) cyclical prices are rising and (b) monetary policy should have some effect on bringing this inflation down.

At the same time, the recent jump in financial volatility will likely affect the decision to raise rates. 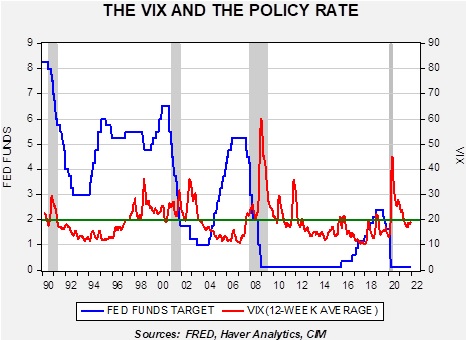 This chart shows the policy rate target along with the 12-week average of the VIX.  We have placed a line at 20 for the VIX.  Over the past two decades, the Fed has tended to avoid raising rates when this measure of the VIX exceeds 20.  Although the current reading is below 20, it is close to that level, so recent market volatility could easily push the VIX above 20 in the coming weeks.

The key unknown is the path of inflation.  Due to the disruptions brought by the pandemic, forecasting inflation is unusually difficult at present.  Yet, the same base effects that have lifted inflation this year will likely have the opposite effect in 2022.  Overall, we expect the Fed to end its balance sheet expansion next year, but the first-rate hike will probably be in late 2022 at the earliest and more likely in Q1 2023.