As various permutations of the yield curve invert, projections of recession are increasing.  One of our favorites, the 10-year T-note/fed funds yield curve, has been inverted for three months. 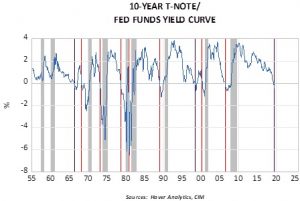 This chart shows the history of this yield curve; since 1960, every recession was preceded by an inversion of this indicator.  However, that isn’t to say that every inversion led to a recession. There were two false positives in the series, one in 1965 and another in 1998.  The former we consider a true false positive as the inversion lasted several months but a recession didn’t follow.  The latter event only lasted one month and was tied to the financial turmoil of the Asian Economic Crisis, the collapse of Long-Term Capital Management and the Russian debt default.  The fact that the inversion was short-lived weakens the case that it was a true inversion.

If this signal of recession holds, when does it arrive?  Here is a look at the timing: 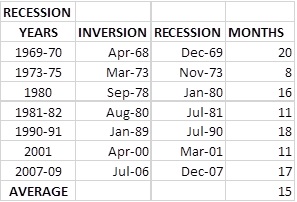 On average, recessions occur 15 months after inversion; that would put the onset around next September.  The range is eight months to 18 months.  Using that range, the recession could begin as early as February 2020 or as late as February 2021.  Although this history offers some insight into timing, the reality is that the number of events is rather limited.  Thus, investors should treat the data as a guide.  The economic data remains mixed, but the preponderance of the evidence suggests that the U.S. economy is weakening but not in recession.

As we have noted before, recessions tend to have two causal factors, policy error and geopolitical events.  The 1973-75 and 1990-91 recessions are considered to be partly due to geopolitical factors; the former was affected by the Arab Oil Embargo and the latter by the Persian Gulf War.  However, both also had yield curve inversions.  It is quite possible that the geopolitical events caused the recessions to occur faster than they might have otherwise in the absence of these events.