For reference, this is the two-year/10-year Treasury spread. 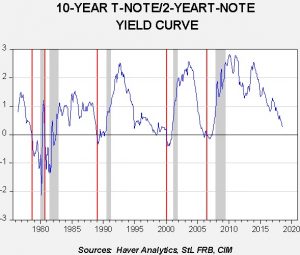 The gray bars show recession and the red vertical lines are placed where the yield curve inverts.  On average, it takes 15-months from inversion to recession, with the range being 10 to 18 months.

The sector data only covers the last three recessions.  We have taken each inversion and index the 10 sectors to the inversion, tracking the data one year before the inversion and two years after.  The chart below averages the three events. 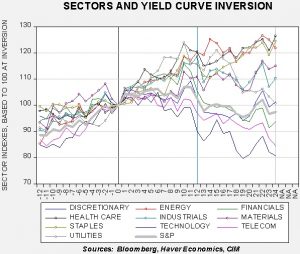 We have placed vertical lines at the point of inversion at one year and two years from inversion.  As we noted earlier, the overall S&P 500 tends to avoid an outright decline until the recession starts.  The best sectors are Health Care, Consumer Staples and Energy.  Materials and Industrials tend to hold up.  The worst performing sectors are Technology, Telecom and Financials, although Financials performed rather well in the 2000 inversion.  Thus, there are no huge surprises here.  Health Care and Consumer Staples are defensive sectors.  In all three cases, oil prices were rising into the inversions and thus supported energy equities.  The 2000 inversion and subsequent recession also ushered in a major decline in Technology and Telecom and these sectors were generally weak during the other two events.  Finance fell hard in the 1989 and 2006 inversions.

This tells us that when the next inversion occurs, investors should consider positions in Health Care, Consumer Staples and Energy, with underweights in Technology and Telecom.  Obviously, each cycle has its own unique characteristics, but history does offer some insight into potential market behavior.

[1] We exclude REITS from this study.