As we noted last week, equity markets are trading at the upper end of the range defined by the relationship between the Federal Reserve’s balance sheet and equities.  To some extent, the level of the relationship is somewhat less important than what the expanded balance sheet signals, which is that monetary policy remains accommodative.  In our AAW from June 24, 2016, we discussed St. Louis FRB President Jim Bullard’s paper on monetary regimes.  Bullard is projecting only one rate hike of 25 bps over the next two years unless economic conditions change, a position for which he has taken some criticism. However, we note that a recent paper by San Francisco FRB President Williams suggests that the neutral real interest rate has probably declined to near zero, meaning that if inflation is 2%, the target rate for fed funds that would be neither stimulative nor restrictive would be 2% as well.  To stimulate growth, the policy rate would need to be below 2%, suggesting little room to raise rates.  Although various U.S. central bank officials keep suggesting that every meeting is “live,” meaning a rate change could occur, the reality is that there appears to be a distinct intellectual trend toward the idea that the slow growth the economy is facing is more than just temporary headwinds.  In fact, Ben Bernanke recently blogged that the FOMC does appear to be shifting its perspective on the economy in a dovish direction.[1]

There is increasing attention on fiscal policy.  We note that both presidential candidates are calling for increases in infrastructure spending.  Our review of economic literature shows little consensus on the multiplier effect of government investment spending; there is no doubt, however, that the state of U.S. roads would be improved by repairs.  On the other hand, it isn’t obvious what sort of investment the government could make that would equate to the building of the interstate highway system or the dam building of the Great Depression.  If the Federal Reserve and the government coordinated stimulus through direct funding (“helicopter money”), the effect could be substantial, although its most important impact might be in currency depreciation.[2]

What this all means is that the financial markets, which have been projecting significantly less tightening than the “dots” chart has been signaling, are probably correct.  Interest rates will likely remain low and the terminal rate will probably come nowhere close to what we saw prior to the 2008 Financial Crisis.  This situation puts policymakers in a difficult position.  In both the U.S. and in Europe, there is great reluctance for fiscal expansion.  Most of the policymakers came of age during the high inflation years of the 1970s and early 1980s and are quite skeptical of government spending.  If a recession were to develop, the Federal Reserve would find itself at the zero bound rather quickly.  At that point, all monetary policy could offer is either QE4 or negative nominal rates.  The former might help equities but foreign experience with negative nominal rates has been quite disappointing.

So far, policymakers in the major economies have avoided competitive currency depreciation.  However, a move to such policies will become increasingly tempting as other tools fail to deliver growth.  This was the pattern seen during the 1930s. 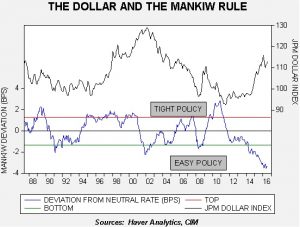 This chart shows the deviation from the Mankiw Rule model, using core CPI and the unemployment rate along with the dollar index.  In the past, the FOMC paid little attention to the dollar in setting policy.  However, commentary from the Fed minutes suggests “international” concerns are being discussed at length.  We suspect that the dollar (using the JPM effective exchange rate as a proxy) would need to fall before the FOMC would consider raising rates.

This means that, despite protests to the contrary, the FOMC probably won’t raise rates for a while unless (a) the dollar weakens, (b) core inflation unexpectedly rises, or (c) unemployment falls further.  The risk of a rate hike is that it would push the dollar higher and tighten policy more than the FOMC would want.  This puts the Fed in something of a quandary.  They would like to have a higher rate in place, if for nothing more than to give them room to lower rates into the next downturn.  However, due to the uncertainty surrounding the reaction of the dollar, we expect monetary policy to remain on hold into 2017, assuming the three conditions noted at the top of this paragraph don’t arise.  If that is the case, equity values should remain supported.