When President Trump was elected, there were expectations that fiscal policy would become more stimulative, which would lead to faster growth, tighter monetary policy and dollar strength.  There were also promises of regulatory relief.  In November, soon after the election, financial markets, exercising their usual pattern of discounting the future, immediately began to react to these expectations.  This week, we want to look at how these expectations have fared thus far.

We begin by looking at the 12 asset classes that we monitor in our Daily Comment to see how they have performed.  We indexed the data to the close on Election Day. 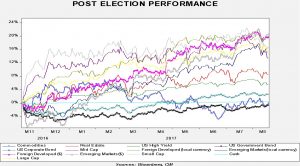 A couple of individual charts are worth noting.  First, small cap stocks, which jumped after the election, have begun to roll over.  The Affordable Care Act weighed heavily on smaller firms and hopes of a repeal likely boosted small cap stocks due to expectations of easing regulatory burdens.

This chart shows the relative performance of the Russell 2000 and the Russell 1000 Indexes, or small cap versus large cap stocks, indexed to Election Day.  After a strong rally following the election, small cap stocks have clearly weakened.  We suspect much of this is due to disappointment with the path of policy.

The other item we want to highlight is the path of the dollar.

This chart shows the G-10 dollar index, again from Election Day to the present.  The dollar rose after the election and peaked about 4% from Election Day.  As the Trump agenda has stalled, the dollar has come under pressure and has fallen about 5% below the level seen at the election. If the full GOP agenda had been legislated, it would have been dollar bullish.  Fiscal stimulus, including tax cuts and infrastructure spending, would have boosted demand and likely prompted monetary policy tightening from the FOMC.  At the same time, the border adjustment tax, which would have acted as a tax on imports and a subsidy on exports, would have also boosted the dollar.  Sluggish economic growth and the Republicans’ inability to pass legislation, along with low inflation, have slowed the pace of monetary policy tightening.  The dollar has weakened, in part due to fiscal policy disappointment and the use of short dollar positions to protect against the erratic behavior of the Trump government.

Perhaps the bigger surprise has been the relatively weak performance of commodities despite dollar depreciation.  There is growing evidence that commodity price performance is becoming more sensitive to China.  This year, the Chinese economy has been a bit choppy due to policy uncertainty surrounding October’s Communist Party meetings, which will select the personnel for Chairman Xi’s second term.  Thus, we will be watching to see what Chairman Xi focuses on for his second term.  Will he try to address China’s debt problem through slower growth and a bias toward the household sector, or will he go for growth?  If he picks the latter, commodities will benefit.  If not, they will likely languish.   Slowing the rise in debt is probably the right choice over the long run; however, it is a risky proposition in the short run.  Thus, the safer bet is that he will continue to keep growth elevated which will lead to higher levels of debt.