One of the relationships we monitor is retail money market levels (RMMKs).  In theory, any available liquidity could conceivably end up purchasing equities.  But, RMMKs are used by investors in their brokerage accounts and thus are probably “closer” to equities compared to other forms of “near money,” such as checking accounts, savings accounts and certificates of deposit.  The chart below shows the most current reading. 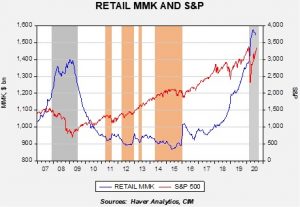 This chart shows retail money market levels on a weekly basis along with the Friday closes of the S&P 500.  The gray bars show recessions, whereas the orange bars show periods when retail money market levels fall below $920 billion.  In general, when RMMKs fall to $920 billion or below, the uptrend in equities tends to stall.  It would seem there is a certain level of desired cash, and when that level falls below $920 billion, households try to rebuild cash by either slowing their purchases of equities or selling stocks to build liquidity.

During the runup to the Financial Crisis, we saw a rise in RMMKs.  The peak in liquidity was reasonably close to the trough in the S&P 500.  In early 2018, we saw a notable rise in RMMKs that persisted despite the rally in equities.  As the pandemic hit and the Federal Reserve aggressively eased monetary policy, RMMKs soared.  The rise in RMMKs initially coincided with the sharp decline in stocks, although the pace slowed as equities recovered.  It peaked in the second half of May and has been trending lower.  When RMMKs fall, that liquidity must go to some other asset, real or financial.

Although scaling RMMK is difficult, we do note that the ratio of M2 excluding RMMK does tend to track the fed funds target with a lag.  This makes sense.  Holding “cash” outside of a period of crisis is usually driven by interest rates.  As rates fall, and hopefully the crisis eases, the current elevated level of RMMK will start to look for higher returns.

The chart suggests that RMMKs should begin to decline in earnest by December; where that liquidity finds a home is uncertain, but we would expect a good portion of it to go into equities if inflation fears remain muted.