In analyzing the path for the economy, an important factor is separating the temporary effects of the pandemic from those that are longer lasting.  The debate over whether inflation will be transitory is tied to this determination.  The impact on the labor markets is another element.  One change that appears to be permanent is that the pandemic accelerated retirement among baby boomers.

Currently, Americans born in 1959 or earlier are eligible for Social Security, but 65 years old remains the traditional retirement age.  Americans working past 65 years old, at least as a percentage of the total labor force, was common after WWII.  Social Security was still relatively new.  However, from 1947 to 1985, the participation rate for Americans over the age of 65 fell from the 28.6% peak in October 1949 to a low of 10.4% in June 1984.  The number of Americans in the labor force over the age of 65 peaked at 11.2 million in February 2020.  It has fallen since the onset of the pandemic.  The participation rate, the percentage of workers relative to the labor force, has declined since the onset of the pandemic and is continuing to decline. 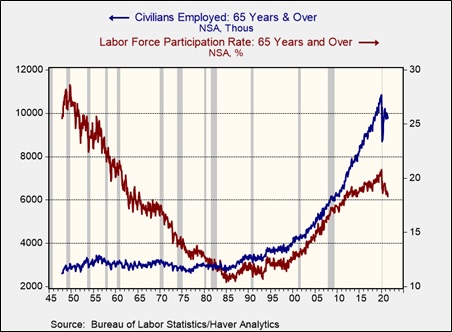 The chart above shows both the actual number of civilians employed over the age of 65 and the percentage of these workers compared to the labor force of 65-year-olds and older.  Participation has been rising since the early 1990s.  Some of this rise is simply due to a rising population of Americans aged 65 years and older relative to the total population. 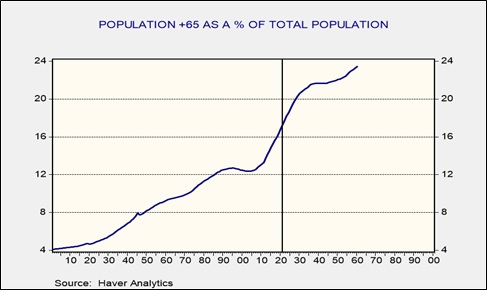 This chart shows the actual and projected level of 65-year-olds and older compared to the total population.  The percentage has been rising since 2003 and is forecast to plateau in 2040.  The entire baby boom generation will be 65 years or older by the end of the decade.

We developed a simple model to measure labor participation of those 65 years and older compared to the population of that age cohort.  Starting in 2008, the model generally predicted the path of participation in this age bracket.  However, since the pandemic, participation has plunged, and the pattern suggests that it’s likely permanent.  Using a similar calculation using the employment/population ratio for this age cohort, the decline in older worker employment represents around 833,000 jobs.  Assuming a stable labor force, that would have reduced the overall unemployment rate to 4.9%. 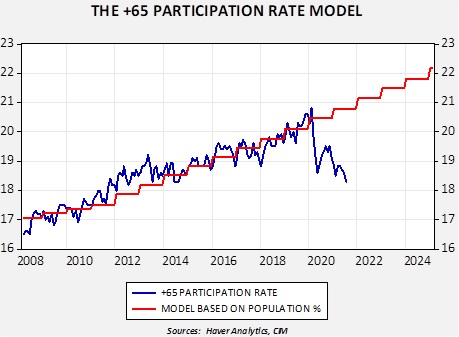 What impact would a decline in workers aged 65 and older have?  Since older workers are often paid more due to their years of service, losing these workers will, at least initially, improve margins.  It will almost certainly lead to some increased hiring of younger workers and may accelerate lowering the age of the workforce.  Industries will not be equally affected; some are at high risk.  For example, in 2020, 32.9% of farmers and 25.0% of aircraft assemblers are in this age bracket.

For markets, older Americans who leave the workforce may be inclined to reduce their equity positions.  However, returns in fixed income are paltry, so the potential negative impact might be less than one would expect.  Dividend-paying equities could be particularly attractive.  But overall, the impact on financial markets will likely be centered on the wage effects.