As wages and other costs rise and pricing power appears constrained, there are reasonable worries about the path of corporate earnings.  We use purely top-down analysis to forecast earnings.  Essentially, we forecast the percentage of total S&P company earnings relative to GDP.  We use the nominal GDP forecast from the Philadelphia FRB’s Survey of Economists along with our earnings as a percentage of GDP forecast to arrive at our estimate; we do note that this estimate is for total earnings for all members of the S&P 500 and not the per share estimate. 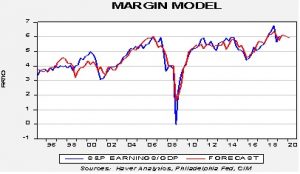 We are currently expecting S&P earnings to equal around 6% of GDP.

There are a large number of components in the model but the most statistically significant are net exports as a percentage of GDP, credit spreads, the dollar and oil prices.  The components suggest that margins will likely contract if the U.S. does move to reduce the trade deficit.  A weaker dollar will help lift margins, and higher oil prices will tend to lift margins as well.  Narrow credit spreads tend to support margins. 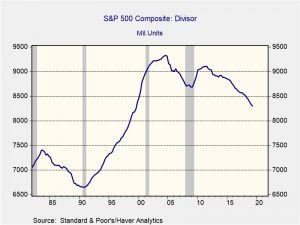 The divisor adjusts the index by accounting for mergers, the exchange of new companies into the index, and share issuance and buybacks.  The persistence of share buybacks is clearly reducing the divisor which acts to boost earnings per share.

Adjusting for all these factors, our current forecast for earnings this year is $157.20, which is down from $160.93 at the beginning of the year.  We do use Standard and Poor’s earnings data, which tends to be less than the more widely reported data from Thomson-Reuters; we use the former because we have a much longer history of that data.  The current difference is significant.  Thomson-Reuters data is about 11% higher than what is reported by Standard and Poor’s. 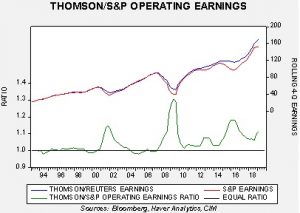 Our conversion model suggests a Thomson-Reuters earnings number of $168.92, which is well above the current consensus of $165.21.  Given that we are working off a 3.8% nominal GDP growth rate (and so, 2% inflation would lead to a 1.8% GDP growth number), which seems achievable, the financial markets are probably too pessimistic on earnings for the rest of the year.  If we are wrong, it’s probably due to margin contraction.  Although there are worries about future policy causing margins to fall, the policy effect probably occurs next year, not in 2019.