It’s probably no surprise to anyone that information processing has become a bigger and bigger part of the economy over the last several decades.  By now, we’ve all gotten used to seeing new kinds of computers and telephones every year, and we’ve struggled with learning new software programs at home or at work.  Whether you call it the “digital economy” or the “knowledge economy,” what few people realize is that it’s about to reach an important milestone in the data on U.S. gross domestic product (GDP).  Therefore, this may be a good time to explore some of the investment ramifications of the trend. 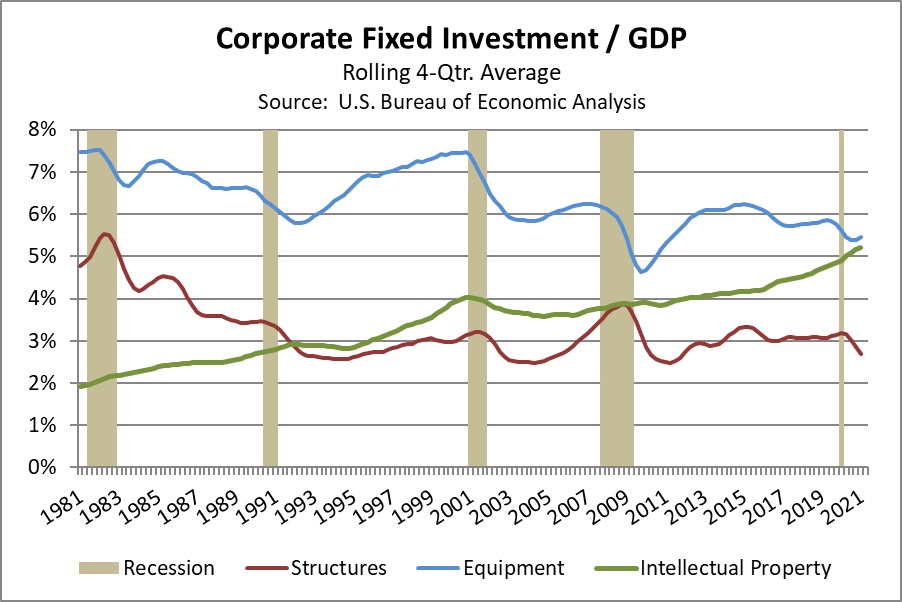 The implications of this evolution are enormous.  In economic terms, the marginal cost of selling an additional software package or leveraging the R&D behind it can be minimal.  In addition, digital products and software can have big spillover effects, in the sense that they can give value to customers beyond the core service the software is designed for.  A good example of this is the “network effect” when the customer gets greater value from joining a social media network when the network has more people.  The low cost of selling additional units and the incentive to capture spillover value means that digital businesses have a huge incentive to grow their network and become as big as possible.  The growing dominance of intellectual property in the economy is probably one reason why corporate profits as a share of GDP have risen starkly over the last several decades (see chart below).  Note, however, that those businesses’ enormous size is now generating concerns that they are stifling competition, which could lead to tougher antitrust regulation around the world. 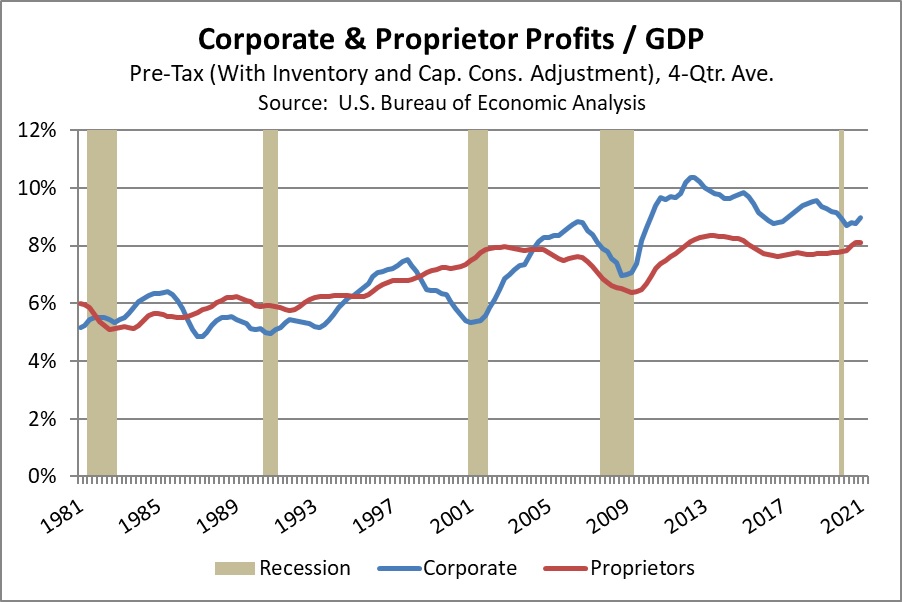 Naturally, investors are attracted to the increasing size and profitability of firms that produce software or can efficiently leverage their digital R&D.  In addition, as other businesses continue learning how to boost their productivity using big data, data management, data analysis, and artificial intelligence, they are probably less likely to cut their intellectual property investment in times of recession.  Indeed, intellectual property investment continued to rise throughout the Great Financial Crisis of 2008-2009 and the recession in 2020 due to the coronavirus, as shown in the first chart above.  From another perspective, the growth rate of inflation-adjusted intellectual property investment has had a standard deviation of just 5.2% since 2000, which is modestly lower than the standard deviation of 5.8% for overall GDP and dramatically lower than the average deviation of 13.9% for equipment and 14.4% for structures.  In sum, intellectual property investment is much more stable than investors realize, so there is a good economic reason why digital technology and software firms are increasingly being seen as “defensive.”  In many environments, we favor this sector for offering an attractive combination of good prospects with relatively less sales volatility than investors perceive.