We originally published the comments below in our Daily Comment on July 27.  However, we have received a number of questions on the widening of the TED spread and the rise in LIBOR to warrant updating the report for this week’s Asset Allocation Weekly.

There has been some curious behavior in the LIBOR markets recently.  Although expectations of Fed tightening are benign, LIBOR rates have been ticking up.

This chart shows three-month USD LIBOR.  Note that over the past month, the rate has moved up around nearly 20 bps.  Usually, such moves occur for one of the following reasons: (a) the Fed is raising rates, or (b) there is a systematic financial system problem developing, leading investors to flee the LIBOR market for sovereigns.  The second case is one of the reasons for monitoring the TED (T-bills vs. Eurodollar) spreads.

The TED spread has been rising and is near levels seen during the last Eurozone crisis.  Although this increase warrants watching, putting the recent rise in context does suggest that this move, thus far, isn’t a signal of a major problem brewing.

Just compare the above chart to the long-term TED.

Note how LIBOR rates spiked in 2008 and were “spikey” from mid-2007 through 2008.  That is a more classic example of the flight to safety element of the TED spread.  We are not seeing that now.

So, why the rise in rates?  It’s entirely due to regulations on money market funds (MMFs).  On October 14, prime money market funds will see their statutory maximum weighted average maturity fall from 90 to 60 days.  In addition, institutional MMFs will be forced to institute a floating NAV and can put up “gates” to slow withdrawals during crises.  We are already seeing the impact. 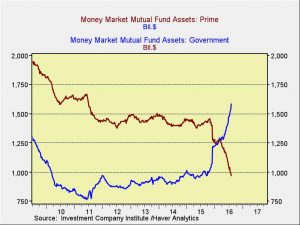 Assets in prime MMFs have declined about $500 bn and government funds have risen by about the same amount since December.  Prime MMFs now represent 35% of total MMFs, down from 53% last October.  The total assets in MMFs are about the same but the allocation has shifted from prime to government MMFs, which don’t face the same restrictions.  We expect further shifts as investors begin to realize that a prime MMF isn’t “cash.”

Here are some potential market effects:

The dollar could rise.  The rise in USD LIBOR hasn’t been matched by a similar rise in EUR LIBOR.  All else held equal, the higher yield should support dollar buying.

A secular change in the TED spread is likely.  In general, investors discount the odds of a problem in the financial markets when they buy LIBOR-based paper.  With the rules on prime MMFs changing, the risk calculation will change, which should permanently shift the spread wider.  It is important for investors to realize that the TED isn’t necessarily signaling a financial system problem during this reset.

The rise in LIBOR and the dollar could be a bearish factor for commodities.  If the regulatory change acts as a de facto monetary policy tightening and isn’t offset by the Fed, we may see some weakness develop in commodities.  The primary driver of this will be the dollar.

Overall, investors will need to consult with their MMF providers and their financial advisors to determine which MMF is appropriate for them.  The issue really is what the function of the MMF is in the portfolio; if it is truly cash, then the government funds might be preferred.  If it is for yield, then one needs to realize that a prime MMF will likely lose its cash-like characteristics during financial crises and one could find that there will be a delay in tapping a prime MMF if financial conditions deteriorate.  Although retail investors in prime MMFs should not “break the buck,” that may not provide much comfort as the potential restrictions on withdrawals remain in place.