One of the more controversial issues of the past bull market was the impact of share buybacks.  The way we like to frame that issue is with the S&P 500 divisor.  The divisor is a number that is used to smooth out the index; when stocks leave the index, through replacement or mergers, or when new stock is issued or purchased, the divisor adjusts to prevent discrete jumps in the index.  Therefore, if companies are buying back stock, the divisor will decline, all else held equal. 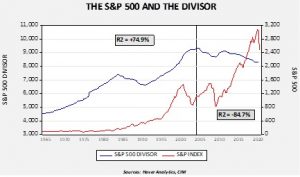 This chart shows the divisor and the S&P 500 from 1964.  In general, it would be reasonable to assume that as stock prices rise, but especially if the P/E multiple rises, companies would generally want to issue stock.  Thus, the divisor would be expected to follow the overall movement of the market.  And, from 1964 until 2004, that was generally true.  The two series were positively correlated at the 74.9% level.  However, from 2005 to the present, despite a major bull market from 2009 to 2020, the trend in the divisor was lower.  In fact, the sign of the correlation reversed to negative. 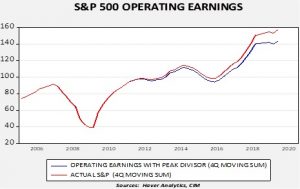 This chart shows operating earnings on a rolling four-quarter basis.  Using Q4 2019, the latest actual data available,[1] the reported operating earnings per share was $157.12; adjusting for the 2011 peak divisor shows a reading of $143.28.

The extensive policy actions taken by the government and the Federal Reserve to backstop the economy and the financial markets will likely come with the costs of direct regulations and social control.  In other words, taking the government’s money or using the Fed’s balance sheet to simply support shareholders through dividends and buybacks is probably not going to be possible.  If that is the case, it is highly likely that earnings growth will be less than what we have seen in recent years.  Margins are another element we are monitoring; these have been remarkably strong for the past decade.  So far, we have not seen aggressive actions to reduce margins but a retreat from globalization and a return to regulation could bring down margins as well.