One of our key investment decisions in terms of asset allocation has been to avoid emerging markets.   There are primarily two reasons for this call.

First, as the U.S. pulls back from its superpower position, the emerging world, which tends to be more dependent on exports for economic development, faces two significant risks.

Second, a stronger dollar weighs on the relative performance of emerging markets to a dollar-based investor.  Again, there are two reasons for this outcome.

The dollar has been strengthening since 2014 due to the divergence of monetary policy between the Federal Reserve (Fed) and other central banks.  The Fed was very aggressive in easing after the 2008-09 recession, not only keeping rates at zero but implementing three rounds of quantitative easing.  The other major central banks tended to lag U.S. efforts.  However, in late 2013, the Fed began to taper its additions to the balance sheet and last December the FOMC raised rates for the first time since 2006.  This change in policy, coincident with other central banks becoming more aggressive in their policy accommodation, led to a stronger dollar. 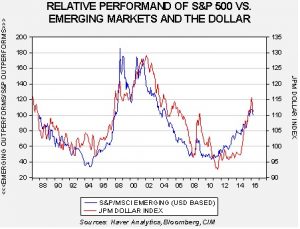 Interestingly, the dollar fell sharply last month.  There is growing evidence that Fed Chairwoman Yellen is keeping policy easier than the Phillips Curve would justify; one of the factors she seems to be targeting is the dollar.  It is clear that the strong dollar has weighed on net exports and the industrial sector, pressuring U.S. economic growth lower.  If the Fed decides to guide the dollar lower, emerging markets will look more attractive.

The key issue for our investment committee is whether these trends are durable enough for a cyclical allocation.  The longer term outlook for emerging markets is still problematic if America’s foreign policy trends remain in place.  That will be part of our decision process in upcoming allocation meetings.