The spread between Thomson-Reuters and S&P operating earnings is narrowing.  This is an issue we have discussed in the past.  There are two primary sources of information for earnings, Standard and Poor’s and Thomson-Reuters.  Most of the time, the two sources are consistent.  However, since the Great Financial Crisis, the latter has tended to report higher operating earnings for the S&P 500 than the former.  Explanations for this divergence vary.  It does appear that Thompson-Reuters takes a more “relaxed” view on what costs are excluded compared to Standard and Poor’s.  Here is the data through Q4 2016: 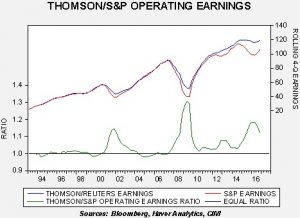 In 2001 and 2008, the spread between the two series coincided with recessions.  Since the Great Recession, we have had two periods where the spread has widened; both are tied to declines in oil prices.  As oil prices recover, the current spread should narrow.

Margins are showing some improvement.  We compare total S&P 500 earnings to GDP.  Our model for this percentage is indicating that margins will improve this year. 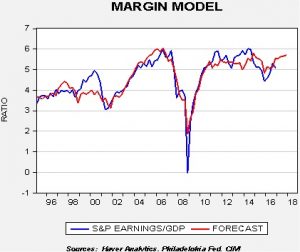 The blue line on the chart shows the actual percentage of S&P 500 total operating earnings to nominal GDP.  For most of this century, this percentage has been ranging between 5% and 6%.   The drop in oil prices led to some margin compression.  We also expect improving productivity and a modest widening of the trade deficit to boost margins, shown above as the red line, which is the model forecast.

Finally, the per-share data will be supported by a steadily declining divisor.  The below chart shows the S&P 500 divisor; it’s a scaling factor for the index. 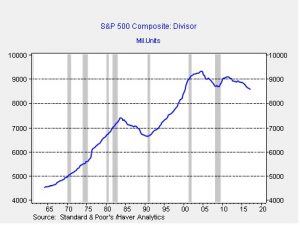 To calculate the index, one takes the overall market capitalization and divides it by the divisor.  The divisor adjusts to changes in the composition of the index, as well as new issuance, share repurchases and mergers.  The rise in share buybacks has led to a steady drop in the divisor; we are now at levels last seen in early 2000.  As the divisor declines, the per-share value rises.

Despite this increase in earnings, we have not boosted our S&P 500 target forecast of 2400 for the year.  We view the P/E as elevated at this point and so we expect the rise in earnings to mostly result in a weaker multiple.  At the same time, this change will make equity markets less expensive and thus less vulnerable to disappointment.  If the rise in business and consumer sentiment supports the multiple, we will make appropriate adjustments to our forecast.

[1] This is basis S&P operating earnings.  The other major provider, Thomson-Reuters, has the higher numbers that are usually reported in the media.