Recently, the three-month T-bill/Eurodollar spread (TED spread) has widened, raising concerns about financial stability.  In this report, we will offer a primer on the spread and discuss its recent rise.

The TED spread has two components; it’s a direction-of-rate spread and a flight-to-quality spread.  Eurodollars (also known as LIBOR) represent dollar borrowing that is not government-guaranteed.  It originally began when Europe accumulated dollars during the 1960s as part of Bretton Woods and the dollar’s reserve status.  As Europe ran trade surpluses with the U.S., they acquired dollars which they wanted to lend to earn interest.  At the time, U.S. interest rates were governed by “Regulation Q,” which set deposit rates for U.S. banks.  During periods of tight monetary policy, U.S. borrowers could find European dollar lenders willing to lend those dollars at a premium to domestic interest rates.  Thus, if banks found themselves unable to borrow from the Federal Reserve, they could use the Eurodollar market to acquire liquidity.  However, unlike the domestic market, Eurodollars offered no lender of last resort protections and thus carried premium interest rates.  Under normal circumstances, the yield premium was around 20%.  So, if domestic dollar borrowing rates were set at 5%, Eurodollars yielded 6%.  Obviously, if domestic rates doubled, to 10%, Eurodollars yielded 12%.  This pattern explains the TED spread’s direction-of-rate element; during a rising rate market, speculators would short Eurodollars and go long T-bills, profiting from a widening spread.  In a falling rate market, the reverse position would be implemented.

The other component is the flight-to-quality spread.  Because Eurodollars are not government-guaranteed and do not have direct support of a central bank, investors flock to T-bills and shun Eurodollars during periods of stress.  This widens the TED spread. 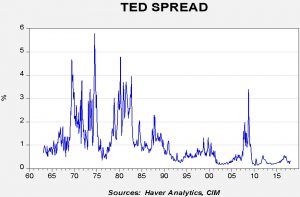 As the chart shows, there was a great deal of volatility in the spread.  As we will discuss below, this was partly due to flight-to-quality incidents along with volatile monetary policy.  Under Chair Volcker, the Federal Reserve targeted the money supply instead of fed funds which led to rate volatility.  Spread volatility declined as interest rates fell and the Federal Reserve returned to fed funds targeting.  In addition, the end of Regulation Q in 1986 ended the government’s practice of setting maximum deposit rates.  This increased the government-guaranteed rate and essentially narrowed the spread.

To separate the direction of interest rate effects from the flight-to-quality factors in the spread, we regressed the Eurodollar (LIBOR) rate by the T-bill rate with a variable to account for Regulation Q.  This chart shows the results of that model. 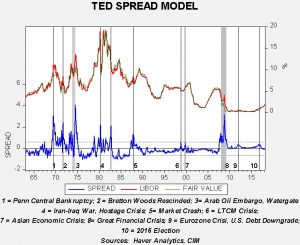 The lower line on the chart shows the deviation in Eurodollar interest rates relative to T-bill rates.  A widening spread is represented by a rising lower line.  Clearly, financial, political and geopolitical events can widen the spread; we have marked the important ones.  The current spread is essentially at fair value, suggesting the widening of the TED spread isn’t due to any sort of financial crisis but is entirely due to rising yields.  In other words, the widening of the TED spread is consistent with increasing interest rates and, so far, does not indicate significant financial stress.