Last week, we discussed the impact of reducing the size of the Federal Reserve’s balance sheet on stocks and bonds.  This week we will discuss the effects of QE on monetary policy.

The FOMC dropped rates to near zero by January 2009.  Although European central banks (including the ECB) have since taken policy rates below zero, in 2009, the “zero lower bound” was considered to be the lowest rates could fall.  Thus, when the Fed wanted to stimulate further, it felt it could not lower rates below zero.  The U.S. central bank was left with nothing but unconventional policy.  The two policy tools employed at this point were forward guidance and QE.  The former was a clear signal from the Fed that rates would be kept low for the foreseeable future.  The latter was the expansion of the balance sheet.

The problem was that it was difficult to determine how much stimulus these tools generated.  One attempt to answer this question came from the Atlanta FRB.  To estimate the impact of unconventional policy, Wu and Xia used the yield curve to measure the impact on borrowing rates. 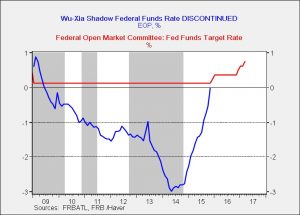 Based on their analysis, QE and forward guidance were the equivalent of negative nominal rates of nearly -3.0%.  As tapering set in, the “shadow” rate rose rapidly.  The bank has discontinued calculating the rate, suggesting that once the fed funds target rate leaves the zero floor, the applicability of the shadow rate is reduced.  Essentially, they argue that once rates lift off the zero bound, the shadow fed funds rate is no longer applicable.

Using the shadow rate as a guide, we can get a feel for how much policy has tightened relative to earlier cycles. 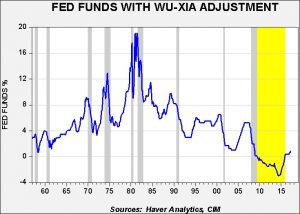 This chart shows the effective fed funds rate from 1957 to 1982, the estimated and actual target from 1982 to 2009, the shadow rate (shaded in yellow on the chart) from 2009 to 2015 and a return to the target rate after 2015.  We have then calculated the trough and peak in fed funds tied to the end of each expansion from 1960 through 2008 along with the current cycle using the shadow rate.

We have highlighted the current cycle in yellow and excluded it from the average.  To reach the average level that has preceded recessions in the past, the FOMC will need to make around seven more rate hikes of 25 bps.  Excluding the Volcker money-targeting regime years would reduce the average by roughly 125 bps, meaning that the Yellen Fed will be flirting with recession with only two more rate hikes.(Source: Haver Analytics, CIM) 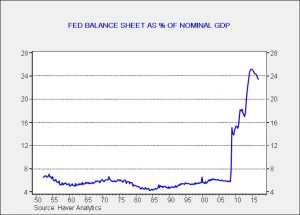 The balance sheet, scaled to GDP, is off its all-time highs but, at 23.4%, is well above the pre-QE level of 5.8%.  If level is the key determinant of stimulus, then the FOMC can reduce the balance sheet substantially.  On the other hand, the Wu-Xia shadow rate seems to follow the yearly changes in the balance sheet. 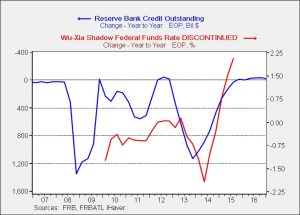 Comments from Fed officials clearly signal that policymakers believe the level is the key indicator of stimulus; last week’s report, which compared equity markets to the level of the balance sheet, would support that contention.  However, as the above chart suggests, a case can be made that the change in the balance sheet has an impact as well.

By 2018, it is quite possible the FOMC will have raised rates by another 50 bps and will have started the process of reducing the balance sheet.  The latter policy could tighten monetary policy by an unknown amount.  And, as we noted above, excluding the early Volcker years, two rate hikes may be getting us closer to recession levels than generally believed if the shadow rate accurately represents the actual trough in the policy rate.  It should be remembered that forward guidance was part of the policy as well.  Simply indicating that hikes will occur in the future affects financial markets today.  Although this isn’t an immediate concern, it appears we are gliding into a period of enhanced risk by autumn.  Adding to this issue is that both Chair Yellen and Vice Chair Fischer are expected to leave the FOMC in January.  Depending on who President Trump appoints, we could have a change in the policy stance of the central bank.

We will be watching financial markets closely in the coming months to see how these issues we have raised over the past three weeks will affect the economy and financial markets.  Our concern is that policymakers and markets have never experienced a sustained drop in the Fed’s balance sheet; it may be innocuous or it may be a problem.  History will be of only modest use and thus the potential for a mistake will be elevated.