As the COVID-19 pandemic continues to evolve, we are watching to see how the disease will affect the economy longer term.  Of course, projections of this sort are highly probabilistic; factors could and will likely emerge that could render these projections irrelevant.  At the same, ignoring potential long-term consequences of the virus could lead to improper decisions, failing to fully appreciate the changes the disease has caused.

The baby boom, encompassing Americans born during 1946-64, has always been the “pig in the snake” for demographers.  When this generation reached school age, the number of elementary enrollments jumped.  Later, in the mid-1970s, enrollment fell and led to empty school buildings.

The current age range for the baby boom is 56 to 74.  In another seven years, this entire generation will reach retirement age.  The chart below shows that the population share 65 years and older is set to rise rapidly for the next two decades.  Demographers for years have been warning that the mass retirement of this generation would cause problems in the labor market, predicting that employers would be scrambling to fill positions. 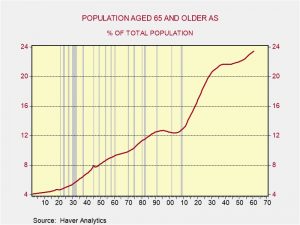 That hasn’t happened yet for a number of reasons—globalization has allowed firms to tap labor resources abroad, immigration has offset some of the retirement numbers, and baby boomers have continued to work longer. 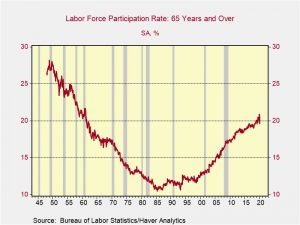 At the turn of the century, the participation rate[1] was around 12.5%.  It has steadily increased to over 20%, although it has recently declined.  Essentially, baby boomers, which include nine years of this group, appear to have remained in the labor force.  We suspect there are two reasons.  First, as life expectancies have increased, wealthier boomers, who are probably healthy, likely wanted to remain working.  Second, less affluent boomers probably needed to keep working as long as possible due to the lack of retirement saving.

COVID-19 could reverse this participation trend.  The fatality rate of the virus tends to rise with age.  Older workers who have stayed in the labor force may decide that the threat of infection is too high and thus opt to retire.  If a broad-spectrum vaccine is developed, this potential trend could be thwarted, but if COVID-19 mutates like influenza and requires an annual vaccination of varying effectiveness, a vaccine might not be enough to prevent older workers from exiting the workforce.  A decline in older worker participation would reduce the labor force; if that action occurs along with restrictions on immigration and trade impediments, all tenets of deglobalization, we would expect the labor share of national income to rise.