A decade ago, the Rent Is Too Damn High Party became a viral sensation after a candidate for the New York governorship, Jimmy McMillan, announced lowering New York rent as his central platform. Now, over a decade later, rent prices in New York have finally started to fall. The pandemic-driven moratorium on evictions has likely played a role in declining prices in New York, but more of this change can likely be attributed to the phenomenon of people leaving cities in favor of suburban and rural areas. In fact, this migration out of major cities into the suburban and rural areas has been so pronounced that national rent prices have risen. Additionally, this increase in rental rates has led some economists to speculate that the uptick in rent prices is a sign that inflation is on the horizon. In this report, we will discuss how the rise in rental rates, and home prices for that matter, may not have as big of an impact on the Consumer Price Index (CPI) as many would claim.

The real estate market has changed dramatically since the start of the pandemic. Rent prices have dropped in the most populated cities, while suburban and rural areas have seen an increase. Since last year, the top 30 cities by population have seen a decline of roughly 6% in rent prices, while the rest of the country has seen a 4% rise. Purchase prices for homes have also risen sharply during the pandemic, with the S&P CoreLogic Case-Shiller index showing an 11% rise since January 2020. Because shelter is heavily weighted in the CPI, there have been concerns that increasing rental and home prices could push the overall CPI higher. 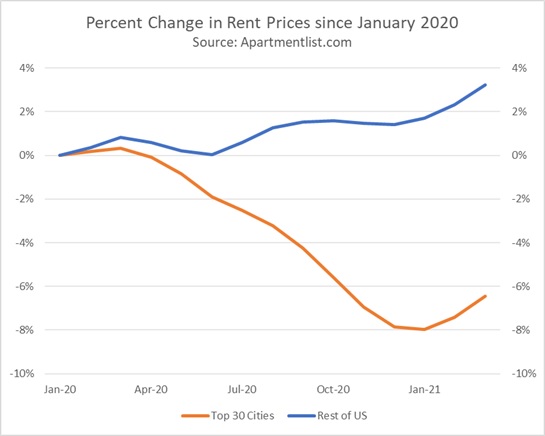 The CPI estimates the total cost of shelter for the urban areas in the country. Shelter prices account for approximately one-third of headline CPI and about 40% of core CPI. Its heavy weighting is due to the fact that it is the one service most consumers cannot avoid. Because of its weight, a significant movement in shelter prices can lead to huge swings in the index. This is one of the reasons people have been paying close attention to rental and home prices. Shelter has two major components: rent for primary residence and owners’ equivalent rent. Owners’ equivalent rent accounts for approximately 73% of the shelter price, while rent for primary residence accounts for 24%.[1]

Since homes are a capital investment, they are excluded from CPI. As a substitute, the index uses owners’ equivalent rent, which is the implicit rent that homeowners believe they would have to pay if they were to rent their own home. In order to gauge what the prospective rent went would be, the BLS asks consumers who own their primary residence the question, “If someone were to rent your home today, how much do you think it would rent for monthly, unfurnished and without utilities?” This approach reduces the impact home prices could have on CPI because the consumers have to take into account actual economic conditions when responding. Thus, consumers cannot simply answer the question by stating their mortgage payment.

In addition, the way shelter is calculated may also contribute to why CPI doesn’t seem to reflect the upturn in rental and home prices. Because 88% of the population lives in urban areas, CPI primarily tracks prices in cities. In fact, the top five heavily weighted cities ― New York, Los Angeles, Dallas, Philadelphia, and Chicago ― account for about one-fifth of the sample size. Therefore, any increase in rent prices and owners’ equivalent rent in areas outside these cities will not likely swing the index significantly. This helps explain why shelter prices in the CPI have waned in recent months, despite the rise in real estate purchase prices. Put another way, the BLS, which calculates CPI, has to create a weighted average for the entire economy. The problem of averaging is that there is a dispersion around an average that may be wide, but the average masks that issue.[2] It also makes sense to weight the average by population; after all, the central bank would probably not want to react to rising rent prices in Salina, KS, when rents are not rising in New York, NY.

In short, due to the way the CPI is constructed and sampled, increases in rental and home prices may not have a strong impact on the index, depending on the dispersion of pricing changes. Furthermore, the slowdown in the rise in shelter prices, as determined by CPI, is due to people moving out of major cities in favor of suburban and rural areas. Thus, we suspect inflation fears about the rise in rental prices are likely overblown, at least in terms of the CPI. On the other hand, because each person purchases their own unique basket of goods and services, some people may be experiencing rising prices in a way that is different from the average experience across the economy.

[1] The other two components are lodging away from home and tenants’ and household insurance.

[2] Often this situation is highlighted in statistics classes by the example of a person with their head in a 350o oven and foot in an ice bucket; on average, the person’s temperature is normal.