Although it is a widely held assertion that lower gasoline prices will lead to stronger consumption, this correlation has been mostly absent following the most recent decline in fuel prices.  We suspect that household deleveraging has tended to weaken the expected impact of lower gasoline prices.  However, there does appear to be a strong relationship between consumer confidence and gasoline prices. 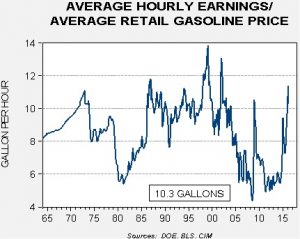 This chart shows how many gallons of gasoline a person can buy with one hour of non-supervisory average wage.  This ratio not only takes into account the price of gasoline but also the effect of wage growth.  Since 1964, the average worker has been able to buy 8.6 gallons of gasoline for an hour’s wage.  Periods of high oil prices are evident on the chart; the two OPEC oil shocks in the 1970s into the early 1980s and the high oil prices from 2003 to 2014 are obvious. 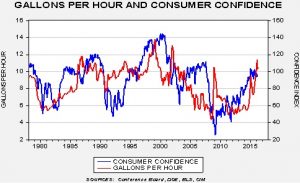 The relationship between gallons per hourly wage and consumer confidence is fairly clear, although there are some periods where the two diverge.  Generally speaking, two variables, the previously described ratio of wages and gasoline prices, along with the unemployment rate, do a reasonably good job of explaining the trends in consumer confidence.

Consumer confidence isn’t a great predictor of consumption or retail sales.  However, since 1990, it has had a good fit with the trend in price/earnings multiples. 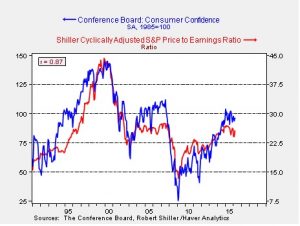 This chart shows the Shiller P/E and consumer confidence.  The two series correlate at the 87% level.  It does seem that rising consumer confidence tends to reflect a degree of investor confidence as well.  Therefore, to the extent that lower gasoline prices and tightening labor markets boost consumer confidence, it is also reflected in multiple expansion, which is supportive for equity markets.