In the NBC mockumentary show The Office, the character Jim Halpert gets tricked into choosing his wife, Pam, as “Employee of the Month.” Perplexed and suspicious, coworkers begin to probe into how Jim’s wife was deserving of the award. Pam, who was also surprised, attempts to justify the result, saying, “I didn’t miss a day, I came in early, I stayed late, and I doubled my sales last month.” Not buying her answer, a coworker rebuts, “Oh, really! From what? Two to four?” In an aside to the camera, Pam replies, “Yup!” This example illustrates how an otherwise shocking statistic can be rendered meaningless when viewed in the proper context. In this report, we will discuss the importance of context when evaluating the Consumer Price Index (CPI) over the next few months and how an expected sharp rise in inflation may not be a cause for concern.

The CPI tracks the monthly price movements of consumer goods and services. The index is based on a weighted average in which services make up 60% of the index and goods make up the remaining 40%. To minimize distortions due to normal monthly variations, the index is adjusted to take seasonality into account as both demand and supply can be affected by seasons. For example, beef demand usually rises in the summer (the “grilling season”), so statisticians at the Bureau of Labor Statistics will adjust for the price effects of this seasonal demand through a seasonal adjustment process. However, these adjustments usually only deal with predictable yearly effects. Unusual weather events or one-off situations are not taken into account. As a result, outlier events such as supply disruptions, war, drought, and, most recently, pandemics aren’t part of the seasonal adjustment process. Thus, the frequently reported yearly change in CPI can sometimes be more reflective of changes in the comparison year rather than actual price pressures. 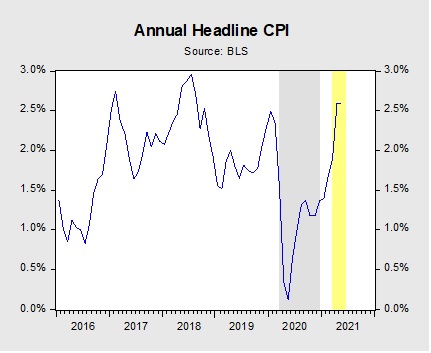 The chart above shows how the year-over-year change in the CPI will look if the index remains unchanged for the next three months. The grey region represents the start of the pandemic in March 2020 through the end of 2020. The yellow region shows annual inflation if the index remains unchanged from February. Using this assumption, headline CPI would show year-over-year increases of 1.9%, 2.6%, and 2.6%, respectively, over the next three months. The 2.6% figures would be near three-year highs. In other words, barring unforeseen deflation, the CPI report will likely show a steep rise in inflation.

The rise in the index over the next few months can be attributed to goods and services returning to their normal levels. Energy prices, particularly, are primed to be one of the key drivers pushing inflation higher. Fuel prices have risen 34.5% after hitting a 15-year low last May.[1] In general, prices for goods have outpaced services due to stronger demand from people forced to stay home. However, as vaccinations become more ubiquitous and restrictions on movement decline, this trend will likely reverse. Fares for travel and entertainment are expected to pick up as good weather sets in and more states begin to allow people to enjoy recreational activity.

It is also likely that stimulus checks could temporarily lift prices. Over the last few months, prices for durable goods such as used motor vehicles and major appliances have surged. White goods have done particularly well, with prices up 24.3% from February 2020. This suggests that households may have used their stimulus checks to purchase big-ticket items. That being said, this inflation will likely be limited as consumers are less likely to buy more of these goods over the next few years.

In summary, over the next few months, the CPI may not paint an accurate picture of inflation. Because the index does not make adjustments based on major outlier events such as pandemics, base-year comparisons can be distorted. As a result, the upcoming CPI report of annual inflation may reflect a combination of deflation in goods and services in the previous year and fiscal stimulus in the current year. Neither will result in the unfettered inflation that skeptics are warning about as both are one-time events. As a result, any adverse impact caused by these reports in the financial markets will likely be short-lived.