The most recent Federal Reserve minutes indicated that the U.S. central bank is preparing to reverse its experiment with quantitative easing (QE) by reducing the size of its balance sheet.  Although the eventual desire to reduce the size of the balance sheet is no real surprise, the timing was unclear.  It now appears that the FOMC will begin reducing the balance sheet by year’s end.  Over the next three weeks, we will look at the potential ramifications of reducing the Federal Reserve’s balance sheet.  This week we will examine the impact of QE on the economy.  Next week, we will focus on the financial markets.

QE was a controversial policy; as policymakers explained it, there seemed to be two elements to the decision to expand the central bank’s balance sheet.  First, it wanted to boost the level of reserves and lower short-term interest rates to spur bank lending.  Second, it wanted to lift the price level of financial assets to increase economic activity through the wealth effect.  There were always a number of risks imbedded in the policy.  First, if banks aggressively lent the money, the money supply would rise and lead to inflation.  Second, the opposite effect could also occur; banks could simply sit on the excess reserves and hamper the stimulative effect of lending.  Third, the wealth effect could exacerbate wealth inequality.  Upper income households tend to hold more of their wealth in financial assets whereas lower income households usually hold the bulk of their assets in real estate and cash.  By lowering bond yields and lifting price/earnings multiples, higher income families benefit.  If home prices don’t rise, or if lenders prevent cash-out refinancing, the policy’s wealth impact would widen wealth gaps.  Fourth, the support for financial asset markets could lead to valuation extremes and create fragile market conditions.

In practice, the effect from QE was rather mixed.  We suspect that a whole generation of economists will write dissertations on the impact of QE.  However, at this particular moment, we don’t have the benefit of this analysis.  Instead, we will have to focus on what effect the balance sheet reduction will have on the economy and financial markets.  Over the past three decades, bear markets in equities are closely tied to economic recessions; in fact, the last major market decline absent of a recession was the 1987 crash.  History also tells us that modern recessions occur for two reasons, a monetary policy mistake (policy is too tight) or a geopolitical event.  Reducing the Fed’s balance sheet, given the degree of uncertainty surrounding the impact of QE, raises the odds of a policy error.

The impact of QE on the economy: QE appears to have done little for the economy.  Economic growth has been stagnant and it isn’t obvious that low rates alone would not have yielded a similar outcome.

The fear among some analysts when QE was implemented was that it would spur inflation.  This was based on Fisher’s monetary identity, which is that money supply times velocity is equal to the price level times available supply, or MV=PQ.  If Q, which represents the productive capacity of the economy, is fixed, and V is thought to be dependent upon the institutional arrangements for the circulation of money, and thus mostly fixed as well, raising M will only lead to higher P.  If there is slack in the economy, Q could rise with steady prices, leading to higher real output.  However, at full employment, inflation is the only result.  In fact, what happened is that the reserves sat harmlessly on bank balance sheets, while the real economy grew slowly and velocity plunged.  The chart below shows annual velocity of money (GDP/M2, or using the identity, V=PQ/M).  Note that during the Great Depression, velocity plunged then as well.  Economists during this period soured on monetary policy and mostly focused on fiscal policy.  That shift of fiscal policy didn’t occur during the 2008 Financial Crisis. 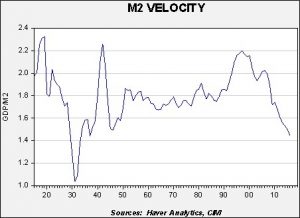 It is unclear why expanding the money supply failed to boost lending.  However, deleveraging was common to both periods of low velocity. 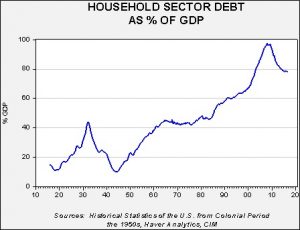 This chart shows household debt as a percentage of GDP.  The plunge in the early 1930s coincides with a steady decline in household debt; the same is true now.[1]  If there is a drop in demand for loans, injecting reserves into the banking system won’t have much impact on the real economy.  Conversely, shrinking the balance sheet should do nothing more than reduce the level of excess reserves on commercial bank balance sheets.

[1] It is interesting to note that velocity did rise in the early 1930s during the Great Depression.  This was due to a horrific policy error where the Federal Reserve tightened policy into the teeth of the downturn, triggering a deeper drop in growth.