In June, the World Bank cut its global GDP growth projection for this year from 4.1% to 2.9% owing to a spike in energy and food prices, which in no small part has been influenced by the Ukraine war and the resultant freezing of Russia’s foreign reserves. This has further curtailed supply and trade, which were already constrained by the global pandemic and altered by the general trend toward deglobalization. Deglobalization, coupled with an increase in regulation, could institutionalize a level of inflation above the Fed’s 2% target and lead to shorter business cycles than what we have become accustomed to since 1990. 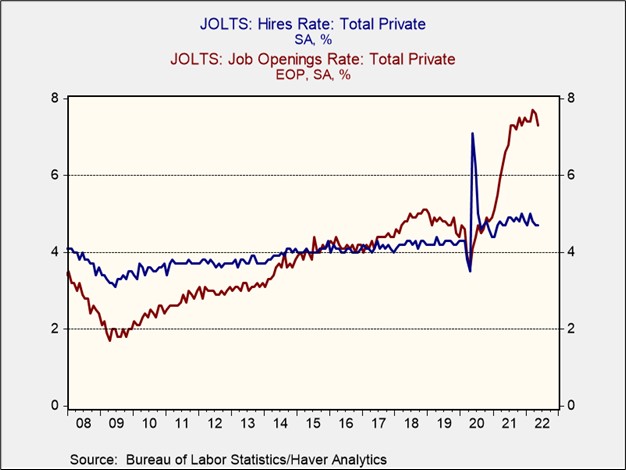 In the U.S., inflation has vaulted higher, with the CPI rising 9.1% year-over-year as of June, the largest annual increase since the end of 1981. At its recent meeting, the U.S. Federal Reserve increased the fed funds rate by 0.75%, the largest single hike since October 1994. In the conference following the meeting, Fed Chair Powell indicated that further rate hikes are in store for the balance of this year and into 2023 with the goal of pulling down inflation to the Fed’s 2% target range. Adding to the dynamic is the Fed’s reduction of its balance sheet, which began in June and is poised to accelerate in September to a monthly rate of $95 billion against the current balance of $8.36 trillion. The Fed’s articulated desire is to quell inflation and reduce the demand for labor without increasing unemployment. As the accompanying chart indicates, the JOLTS openings rate is well in excess of the hires rate. It is this froth that the Fed believes it can remove without aggravating unemployment, thereby accomplishing Powell’s goal of a “softish landing.”

The assertiveness of the Fed, combined with what we find are nascent signs that the spiking inflation is beginning to abate, create fertile ground for a recession in the U.S. The bond market’s inversion of two-year and 10-year Treasury yields underscores the market’s belief that the Fed will pursue its fight too aggressively and stall the economy. It also reflects the dissonance among Fed governors regarding the varying economic consequences of quantitative tightening in the form of balance sheet reduction, increasing the potential for a policy error. We expect inflation to ease within the next few months as the comparative base effects from last year take hold. In addition, we find improvements in supply chains and a satiating of demand from consumers as inventory/sales ratios of merchandise are rising.

Beyond the U.S., the European Central Bank (ECB) is similarly attempting to battle inflation but also trying to maintain tight spreads for rates among its member states. In combatting inflation, which reached a record 8.6% last month, the ECB is expected to raise its deposit rate at its July meeting and perhaps elevate it from negative rates for the first time in over a decade. However, it is simultaneously dealing with fragmentation risk, which is the possibility that yields on debt of some peripheral countries will spike versus German bunds. The ECB is wrestling with these items, while manufacturing data is indicating slower growth and economic sentiment is waning. On the other side of the globe, economic growth in China has slowed dramatically. The world’s second largest economy produced its lowest growth since data was first recorded in 1992 as lockdowns in major cities contributed to the stagnation. Though it is widely believed that the People’s Bank of China will enact stimulus measures to spur the economy, worries abound regarding capital outflows as the U.S. Fed aggressively raises short-term rates. Among other emerging market economies, the risk of default is garnering attention after the government of Sri Lanka defaulted for the first time. Credit default swap spreads across a number of smaller sovereigns that issue debt in hard currencies, such as the U.S. dollar or euro, have spiked significantly, indicating the potential for a contagion effect. As noted in connection with China, capital flows to emerging market economies are at risk under these circumstances.

Equity markets have been in retreat for much of the year as investors have been struck by an array of worries including the Ukraine war, supply shortages, an aggressive Fed battle against inflation, and waning consumer and business confidence, among other concerns. Further pressure on U.S. stocks may come from a compression in earnings. As the chart indicates, four-quarter rolling EPS on the S&P 500 as compared to the earnings forecast based upon GDP is well above its historical standard error band. While the trailing figure relative to the GDP earnings forecast has been on a significant upswing recently, we expect this to decrease as financial conditions continue to deteriorate, the cost of labor increases, and prior inflation becomes fully incorporated. Relative to the cost of labor, larger companies may disproportionately contribute as they engage in elevated efforts to retain employees in a tight labor market. The escalating cost of hiring is encouraging firms to retain employees, despite growing wage levels. The result will likely be increased labor costs and lower margins, especially in service-oriented sectors that lack the ability to fully pass on increased costs to consumers. Beyond the effects of fragile global economies on corporate earnings, higher levels of inflation typically portend lower P/E ratios. Persistent inflation could continue to maintain pressure upon equity prices. 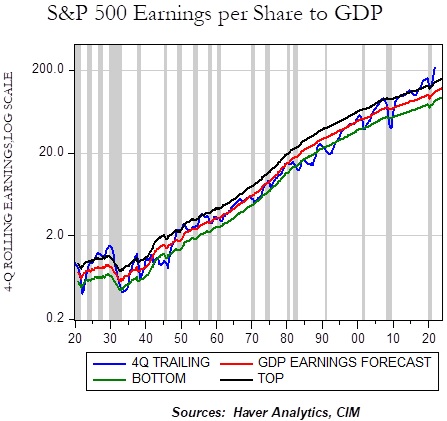 Although our base case is a troubled outlook for the stock market over the next several quarters, various fundamental forces could aid prices over our three-year forecast period. A satisfactory resolution of the Ukraine war would be a significant positive for global equities. In addition, a staggering amount of cash remains on the sidelines, both individual and institutional. If the Fed is able to engineer a softish landing or decides that it has fought the inflation battle too aggressively and/or too late and becomes more accommodative, a modest deployment of cash available for investment could prove to be a propellant for equity prices. Finally, a bottoming in the economy followed by a solid uptick created by full digestion of supply imbalances and improving consumer and business sentiment could buoy equity prices. While we acknowledge the potential advantages for U.S. stocks over our forecast period, we don’t necessarily share the sentiment for some international developed or emerging market stocks. Difficulties faced by some European companies as the ECB practices its version of inflation therapy, and the likelihood of reduced foreign direct investment in emerging economies during a period of elevated sovereign risk, may crimp the shorter-term advantages for international equities in these strategies, especially with a surging U.S. dollar.

Given our expectations for the economy and outlook for stocks, we are further constraining our exposure to risk-based assets. Accordingly, the stock allocations in our strategies are lower, and in some cases the lowest since inception. Within these reduced equity exposures, we maintain a significant bias of 65% to value stocks as they tend to outperform as economic growth retreats. There is also less concentration among the top names, where the top five companies in the S&P 500 Growth Index account for 45.2% versus 11.7% in the S&P 500 Value Index. To complement the value skew, we continue the overweight to defensive segments of Health Care and Consumer Staples, as well as Energy. In addition, we believe the Ukraine war has advanced an increase in defense expenditures among developed countries, thus we retain a position in the aerospace and defense industry. Our efforts to reduce risk also apply to international allocations, where the only exposure is in a Japanese equity position that carries a currency hedge back to the U.S. dollar. The thesis leading to this overweight included the relative pricing advantage of Japanese stocks compared to U.S. counterparts complemented by continued policies from the Bank of Japan that are contributing to a depreciating yen. Emerging markets remain absent from all strategies.

Rampant inflation and a motivated Fed would normally imply caution regarding the bond market. Typically, as the Fed is raising rates and emptying its balance sheet, the fundamental forces it unleashes would cause yields to increase and thereby prices on bonds to retreat. Based upon the impact on bond prices thus far in 2022, we believe much of the punishment to bond investors has already been wrought this year. Moreover, the inversion of the yield curve for two-year/10-year Treasuries indicates market participants are becoming convinced that fed funds increases are going to be limited to this year. Accordingly, we hold a positive outlook for the short- and intermediate-term segments of the Treasury curve. However, the sanguine outlook does not completely extend to credit. With the increasing prospect for a recessionary environment in the U.S., we expect spreads to widen for investment-grade corporate bonds closer to historic averages. While we expect these instruments to produce positive returns over our three-year forecast period, the returns will be restrained by the spread widening. We expect a similar dynamic to unfold in the BB-rated space within high yields. However, in lower rated speculative bonds we find the inherent risks outweigh any advantage at this point in the economic cycle. Consequently, the exposure to speculative-grade bonds in all strategies are confined to bonds rated BB, which are used as a lower volatility equity proxy.

Due to the Fed’s aggressive fight against inflation and the increased potential for a recession, REITs are absent from the strategies. We retain exposure to commodities in all strategies given the utility they offer as portfolio stabilizers as the potential for risk increases. Gold is utilized given its appeal as a haven from heightened geopolitical risk, and a broad basket of commodities, with an emphasis on energy, is also employed across all strategies. The global thirst for energy, especially in Europe as they adjust to sanctions on Russian exports, produces certain advantages for this positioning.