Although the boundless fiscal and monetary spigots are unlikely to remain open indefinitely, we find there is ample liquidity and activity to propel the economic recovery through our three-year forecast period, albeit in fits and starts. Though we note that the prospect for a shortened business cycle exists, this is not our base case. Rather, we expect real GDP growth over the next three years, yet certainly at a less robust pace than we have experienced thus far this year.

The latest meeting of the Fed registered growing concerns about persistently dovish policy. Where Fed members stated earlier in the year that they were “not even thinking about thinking about raising rates,” one of the ‘thinkings’ in the quote is now absent. The rise in core CPI that occurred in June, representing the largest monthly year-on-year increase in 30 years, has weighed upon the resolve of several Fed bank presidents. Nonetheless, though some have waivered on the prospect of being excessively accommodative for an extended period, we expect that the price increases measured against last year’s COVID-induced low base level and further pressure from rolling supply constraints will not prove durable. The higher probability is that current price increases will endure to varying degrees depending on products, but persistent increases beyond these supply adjustments are less likely. We expect that the Fed Chair and the composition of voting members will retain a dovish overall stance, despite some near-term cautionary flags being waved. The least likely Fed action is a decrease in the size of its balance sheet while simultaneously implementing a series of increases in the fed funds rate, as performed in 2018 and 2019. More likely is a decrease in the aggressive $120 billion monthly balance sheet purchases of Treasuries and mortgages. While this will probably lead to volatility in bonds and equities over a short period, similar to the “Taper Tantrum” of eight years ago, we expect prices to adapt relatively quickly. 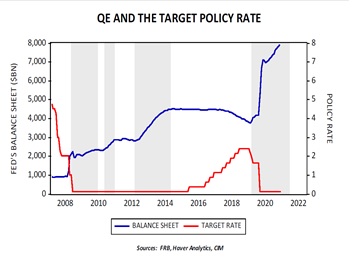 In contrast with some Fed bank presidents expressing caution regarding future inflation, the European Central Bank [ECB] has pivoted significantly from its former position of combating inflation. Where it was previously unimaginable for the ECB to accept inflation above 2%, it is now willing to allow prices to run in excess of its ceiling. President Lagarde disclosed the ECB’s new policy framework of “symmetric 2% over the medium term” and the bank is expected to refresh its guidance on both policy rates and QE program. In addition, the sequential issuance of NextGenerationEU bonds as part of the COVID relief package will provide fiscal stimulus for the continent and support the euro as a reserve currency. Finally, the EU’s €1.1 trillion multi-year budget through 2027 has designated nearly half for modernization, adding further fiscal stimulus.

Beyond the U.S. and the EU, monetary and fiscal stimulus is rampant in developed nations as well as most emerging market economies as they attempt to recover from pandemic-induced recessions. Consequently, the world remains awash in liquidity. While this can lead to distortions in some asset prices and misallocations of capital, the liquidity will allow firms to remain viable during the recovery. The overriding issue, therefore, is whether the eventual reduction in the uber-accommodative postures will lead to a stunting of the business cycle or allow the global economy to enter an expansion. While we expect the latter to prevail, we note the potential for the former is greater than zero yet less likely within our three-year forecast period.

Exposure to equities remains intact as fiscal and monetary policies along with measures of sentiment all support continued economic recovery. Though our expectations have been tempered, our outlook remains positive despite near-term issues. One of the most cited issues is the supply shocks in different segments of the economy, whether semiconductors, building supplies, transportation, or used cars, among other items. The pre-pandemic trend of building redundant supply chains has accelerated and encouraged inventory accumulation, creating bottlenecks in supply and leading to rapid price pressures. The June CPI print of +4.5% year-over-year ex-food and energy underscores the price pressures from supply constraints as inventories are increased. As the chart shows, and economic logic dictates, building inventories historically leads to higher prices. The pandemic has magnified this effect to unprecedented levels, resulting in price increases, which we project could continue into early next year. However, as the uneven emergence from the pandemic unfurls and consumer appetites become satiated, price increases for certain goods could hold at higher levels but we don’t believe they’ll continue their ascent. Thus, we do not expect persistent rapid inflation. 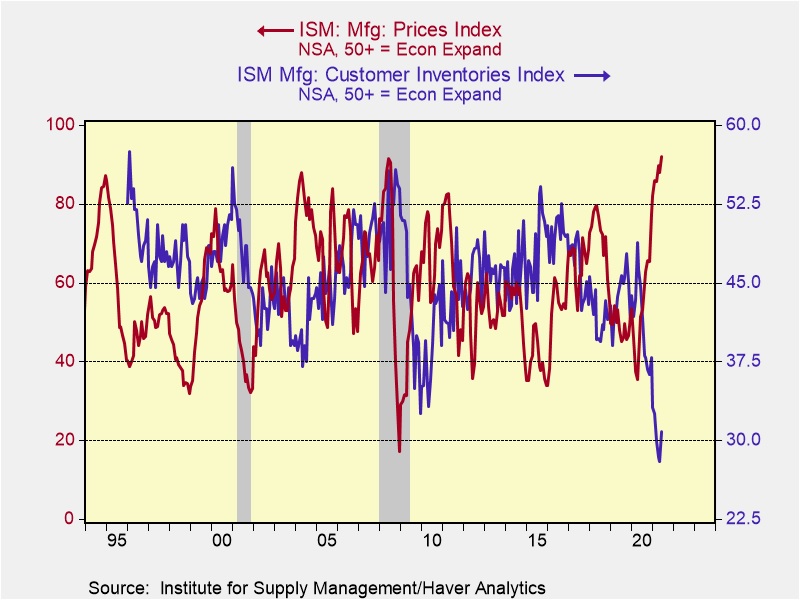 Although the threat of inflation sends shivers through the equity markets, the economic recovery and potential move into expansionary territory bodes well for stocks. While inflation can negatively affect stocks in general, as future earnings are discounted at higher rates and P/Es compress, it affects companies, industries, and sectors disproportionately. Cyclical companies have historically held pricing power during periods of inflation, assuring continued profitability. Further, smaller entities are able to nimbly adjust to changes in supply chains and prices. Our original tilt to value versus growth, overweights to Industrials and Materials in U.S. large cap stocks, and lean toward lower capitalization companies were applied due to expectations of an economic recovery, but issues with near-term inflation don’t invalidate this premise. Rather, it underscores the benefits of this positioning as well as the overweights to Financials initiated in January and homebuilders in October 2020.

International developed markets are facing similar supply issues as the U.S., yet the ECB is more inclined than the Fed to allow inflation to run ahead of its target. We still consider the EU and U.K. to be lagging the U.S. economy by as much as half a year as they continue to struggle to emerge from the pandemic. Other developed nations (Australia, New Zealand, Canada, Japan) are also lagging the U.S. in their respective economies, and their central banks, with the exception of New Zealand, remain ultra-accommodative. The strategies’ exposure to developed markets remains elevated and has an inherent overweight to the Materials, Industrials, and Financials sectors along with a decided tilt toward value, which mirrors the overweights in the U.S. portion. Regarding emerging markets, relative valuations are still attractive, encouraging the retention of a sizable weight to this asset class in the more risk-tolerant strategies. However, concerns surrounding Chinese equities are mounting as belligerence between U.S. and Chinese authorities continues. Since Chinese stocks account for upwards of 40% of the more popular emerging market indices, we find it more prudent to employ an ETF that excludes mainland Chinese stocks.

At the end of last quarter, the bond market rallied on the heels of concerns voiced by several Fed members on their expectations of combatting future inflation. The yield on the long end of the Treasury curve compressed from 2.34% in April to 2.06% by quarter’s end. The curve flattened but remained positively sloped. In addition, the spread on corporate bonds continued to narrow, reflecting investor willingness to accept credit risk. As noted in our Stock Market Outlook, though equity investors have become wary of inflation, the bond market has generally sloughed these concerns. Although we maintain the view that high levels of reported inflation will only last through this year, our outlook for bonds over the forecast period cannot be construed as being particularly sanguine. Not only has the utility of long bonds been eroded due to the rally, but the potential pressure on yields accruing from economic growth moving from a recovery into potential expansion yokes our total return expectations for bonds, especially beyond the seven-year maturity range. Accordingly, the strategies with income as a component have reigned in duration dramatically this quarter and carry heavier weightings to Treasuries and agency mortgage-backed securities [MBS]. While MBS carry both extension risk and also risk if the Fed unwinds some of its MBS positioning on its balance sheet, we view these as being compensated by the spreads widening close to historic levels.

Since S&P separated REITs into its own GICS sector in 2016, the complexion of REITs has become more varied. Retail, office, and hospitality now only account for roughly one-fifth of the market, while warehouses, data centers, and cell towers represent the majority. We view these latter segments as being fully valued and the traditional segments priced for recovery, thus our consensus expectation over the forecast period is for REITs to earn their dividend with little to no capital appreciation. As a result, REITs are employed solely in the Income strategy for the varied source of income they provide. Similarly, speculative grade bonds appear fully valued given their continued compression of option-adjusted spreads over the past year. Consequently, total return expectations for spec bonds are muted and they are used only in the Income strategy.

Expectations for continued global recovery lead to the retention of a broad basket of commodities containing a majority weight to energy components as well as industrial metals. In the more risk-averse strategies, this position is used in conjunction with exposure to gold, which we find attractive as the prospect for geopolitical risk remains elevated. In the more risk-seeking strategies, we added a position in silver for its industrial uses during a global economic recovery.