The coma into which the U.S. economy was placed created the deepest decline in GDP since the 1930s and in the shortest order ever recorded. Over a period of only a few weeks, seven years of employment gains were wiped away and unemployment rates surged to double-digit levels. The monetary and fiscal responses have been extraordinary, totaling over $4.5 trillion in the aggregate, inclusive of the $2.3 trillion Coronavirus Aid Relief and Economic Security Act and the Federal Reserve’s multitude of acronym laden programs designed to calm and ensure the integrity of financial markets. The effects have been encouraging as markets have rebounded. Perhaps the broadest direct and indirect impact on the markets has been the Fed’s shoring up of the corporate debt market through its purchases of broad-based ETFs as well as selected issues. This has had the effect of narrowing spreads on corporates from levels last seen in the Great Recession to more traditional levels, as  illustrated in this first chart.

Our earlier forecast was for a dramatic decline in U.S. GDP recorded for the second quarter of this year, with the potential to stretch into the third and fourth quarters should a second wave of the virus assert itself. Though we now believe that the worst of the economic damage is behind us, our expectations are that the recovery period will be of a long duration. The Fed should be extremely accommodative over the next three years as Chair Jerome Powell noted during his recent testimony to the House Finance Committee. In an effort to aggressively suppress financial stress, the Fed’s posture will keep fed funds rates near zero for the next two years and the Fed’s balance sheet bloated. Even with the accommodation, we do not believe that inflation will become an issue over our three-year forecast period despite the extraordinary measures employed not only by the Fed, but also other global central banks. Given a world awash in liquidity, we find the natural landing spots to be equities and gold, the latter benefitting from global geopolitical uncertainties. 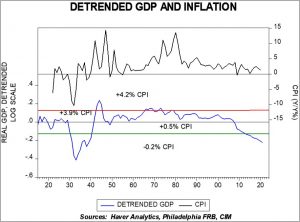 The process we employ in our quarterly cyclical congress led to an extension of where we arrived last quarter relative to expectations for equities. While the pace at which equities recovered over the past quarter was dramatic, the direction was completely within our expectations. We find that the prospects for continued repair and even growth for equities are positive, despite near-term declines in earnings per share, which Confluence estimates to be at $113.70 on the S&P 500 for 2020. The unleashing of pent-up demand, adaptations to work and leisure, and the realigning of supply chains and resultant inventory adjustments all hold positive implications for the U.S. equity market over the next three years.  Naturally, there are inherent risks to this thesis, though we don’t count the November U.S. elections as holding an outsized risk. As the accompanying chart exhibits, our analysis of a change in government implies similar results over the course of our forecast period. Although a switch will certainly create winners and losers among companies, industries, and sectors, the overall market is relatively unaffected. Much more risk could result from a potential policy mistake. A rapid withdrawal of stimulus money, further weaponization of the U.S. dollar, or a full monetization of debt are among policies that could unhinge investor behavior and lead to problems among equities. Nevertheless, we view the potential for a policy mistake of large magnitude to be remote, and thereby remain positive on the equity markets over the next three years. 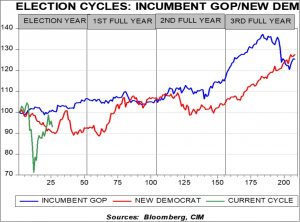 Among U.S. equities, we find lower capitalization stocks to hold more favorable valuations. Accordingly, mid-cap equities are overweight in each strategy. In the strategies with higher risk tolerances, small cap stocks are also overweight. Across the capitalization spectrum we removed the overweight to growth, and now have a neutral posture between value and growth. However, the continued sector overweights to Technology, Communications Services, and Consumer Discretionary create a de facto tilt toward growth, yet not as explicit as the prior quarter.

Beyond the U.S., foreign developed market equities generally hold attractive valuations relative to U.S. counterparts. However, our consensus view over the forecast period is that U.S.-based investors are better positioned with domestic equity exposure due to the lack of a catalyst for the waning value of the U.S. dollar from its current strength. Although developed non-U.S. markets are currently absent from the strategies, emerging market stocks are represented in risk-appropriate strategies. Our view on China, which represents over 37% of emerging market exposure, is that while it engenders significant geopolitical risk, the massive stimulus measures the Chinese government announced at the end of May hold potential advantages for not only Chinese stocks, but also for those in other emerging countries as it is designed for both infrastructure and stimulation of private consumption.

Yields across the U.S. Treasury curve remain historically low and spreads on corporate bonds, including all ratings of investment grade and speculative grade, have narrowed dramatically over the course of the past quarter. The Fed’s entry as a market participant in corporate bonds, through its purchasing of broad-based ETFs and selected individual credits, implies a makeshift policy floor on prices and has instilled confidence in the bond market. Our consensus calls for low rates extending throughout the forecast period, with continued tightening of credit spreads. While we acknowledge the potential for a spike in default rates in high-yield credits as well as an elevated level of credit downgrades due to the effects of COVID-19, over the full forecast period we expect returns on short- and intermediate-term bonds to deliver coupon returns. The sole deviation from this expectation is in the long-term bond category. Although the strategies benefited handsomely from their exposures to long-term Treasuries, we don’t believe that potential returns outweigh duration risk faced by longer-term instruments. Accordingly, they are now absent from all strategies.

Our consensus view on REITs is that in the aggregate they will earn their dividend over the forecast period. The office/retail segment is certainly struggling but represents less than 20% of the REIT index. More impactful are the data centers, storage, and cell towers that represent a growing proportion of the REIT index. Consequently, we believe REITs provide a differentiated source of income and are thereby positioned accordingly in the strategies where income is a component.

Gold has been an element in each of the strategies over the past several quarters, and allocations were enhanced this quarter. Not only is gold an important diversifier in an era of increased global risk, but the price of gold stands to benefit in a world swimming in liquidity that is in search of a haven. Gold is supplemented in each of the strategies with exposure to silver. We find the advantages of having silver are two-fold—the industrial uses for silver make it desirable during an economic recovery and our research indicates that the gold/silver ratio is at its highest level since the period following World War II.