Although several indicators show increased potential for a recession and several metrics have softened, our consensus forecast is that recession in the U.S. is not imminent, and the economic expansion, already in record territory,[1] may continue beyond our three-year forecast period. While some factors, such as the inverted yield curve, the two-year forward LIBOR rate lower than fed funds, and softening in the composite index of 10 leading indicators, have led to an increase in the probability of a recession, this rise is from a level that was close to zero several months ago. Our expectation is that the Fed will be successful in engineering a soft landing, or at least forestalling a recession. One of the principal arguments for our anticipation of continued, albeit muted, growth is the lack of excesses that exist in the economy. Credit creation, housing values, and equity valuations are certainly elevated relative to the depth of the Great Financial Crisis a little over 10 years ago, yet are far from being stretched. Moreover, the Fed retains some room for maneuvering that can assist in its efforts to maintain the expansion, inclusive of further rate cuts and curtailment of its balance sheet reduction. 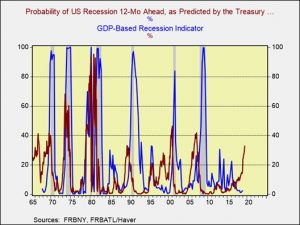 Beyond the U.S., significant leadership and economic uncertainties remain unresolved for the balance of the year. These include the probability of a hard Brexit, Christine Lagarde’s ability to steer the European Central Bank, Italy’s flirtation with broaching the EU’s fiscal rules, the new German chancellor, the replacement of Mark Carney as governor of the Bank of England, the potential for a large reduction in the Bank of Japan’s quantitative easing, and the ability of the People’s Bank of China to continue stimulus measures. Though difficulties beyond our shores can impact the U.S. economy, as the global hegemon it is unlikely that a global slowdown, or even a recession in certain jurisdictions, would cause a recession in the U.S.

The U.S. economy continues to grow, albeit at a muted pace relative to its long-term average. Given the absence of overt inflationary pressures, the Fed is likely to lower the fed funds rate at its meeting in the third quarter, marking its first reduction since 2008. The elevated level of fed funds relative to the implied LIBOR rate, two years deferred, is supportive of a rate reduction as the Fed attempts to engineer a soft-landing in a fashion similar to 1997. 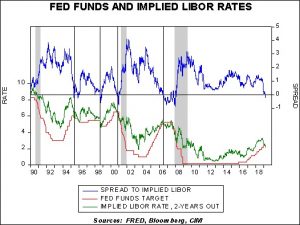 [1] Assuming this is confirmed by the National Bureau of Economic Research, Inc.

In every instance following an initial reduction in the fed funds rate that was not accompanied by a recession, equity investors were rewarded. However, as the accompanying chart indicates, each business cycle has its own unique characteristics. Those cycles where the initial reduction in fed funds were concurrent with a recession are indicated by dots on the associated lines. 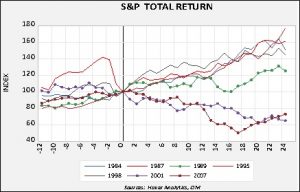 Our position is that the accommodative posture of the Fed will continue to propel the economy and risk-based assets through the end of this year and into next year’s election cycle. In addition, our estimates for S&P 500 earnings are $157.30 in 2019, increasing to $161.32 for 2020.[2] Obviously, a 2.5% increase is far from a cause for celebration, but it does represent an improvement from year-over-year declines recorded over the first half of 2019. Additionally, such growth corresponds with our consensus forecast for positive, though muted, GDP growth. Nevertheless, the potential for a policy mistake, intensifying trade impediments, or building inflationary pressures necessitate vigilance and the willingness to trim equity exposure should conditions warrant.

All risk assets within the strategies remain in the U.S. As noted in the Economic Viewpoints section on the previous page, we remain cautious on non-U.S. exposure over the near-term. Although relative valuations are promising, the range of uncertainties encourage our purely domestic exposure. Within investing styles, we maintain our neutral posture between value and growth. Among sectors, Industrials, Technology, and Materials continue to be overweight. While the allocations to equities remain at historically high levels in the strategies, with an overweight to lower capitalization stocks, we trimmed a portion of the small cap position in three of the strategies in favor of increasing the exposure to mid-caps in all strategies. The rationale for this change is due to our view that the latter stages of an economic cycle coupled with pronounced M&A activity is normally favorable for mid-cap stocks.

The prospect for an increasingly accommodative Fed going into the election season guides our view that the yield curve will return to its traditional slope over the course of the year, principally through a reduction in short-term rates. Through our full three-year forecast period, we are positive on longer term rates as long Treasuries have significantly attractive yields relative to those from other developed countries. Though we have some concerns regarding the nearly $5 trillion in corporate debt maturing before 2023, this concern is offset by the $12 trillion of bonds outstanding globally with negative yields, representing 24% of the global bond market. This fact supports the notion of an adequate appetite for the maturing investment grade corporate credits. In the speculative bond space, however, we expect spread widening over the full forecast period owing to a slower economy being less supportive of lesser rated bonds.

The duration of bond holdings in the strategies with income objectives has been extended slightly accruing from our forecast for an accommodative Fed, a slowing economy, lack of inflationary pressure, and global demand for bonds. We retain the laddered structure as a nucleus beyond the short-term segment in these strategies.

Although REITs have enjoyed outsized returns thus far this year, our forecast for rates combined with a lack of excesses in the commercial real estate segment leads to our sanguine view on REITs. Thus, the small exposure remains in the Income with Growth strategy due to the diversified income stream that REITs provide.

Gold is retained at a modest allocation given its ability to offer a hedge against geopolitical risks combined with the safe haven it can afford during an uncertain climate for the U.S. dollar.