It’s summer, the time of year when Europe seems most likely to fester with a government debt problem.  And so it’s not surprising to find Greece on center stage, playing a familiar role.  We’ve seen this show before…too much debt, a weak economy and the need for more time and money.  The endings tend to be the same.  The hardest issues are not fully addressed, while debt and solvency problems are kicked down the road.  The upside is that Greek problems seem unlikely to create a widespread financial crisis, but we note that the challenges are chronic and unresolved.  We expect sequels to this play and will watch closely to see how Greece and other weak peripheral European states respond.

Another drama unfolding in a different theater is the enormous volatility in the Chinese equity market.  Following a meteoric rise, fueled in large part by margin-laden speculation, Chinese stocks have gyrated wildly, oftentimes collapsing in spectacular form.  It appears much of the movement, both up and down, has been caused inadvertently by governmental policy.  Command and control capitalism is oxymoronic, yet the Chinese government is attempting to displace Adam Smith’s invisible hand with the Communist Party’s iron fist.  It’s an odd situation, one that reveals the undeveloped nature of China’s financial system.  Fortunately, most of the volatility and downdrafts have been contained in China.  But China has the world’s second largest economy, and its growth rate has been slowing.  Therefore, we’ll continue to monitor how and if China’s equity challenges affect global economic growth and geopolitical risk.

Even as Greece and China are making headlines, we believe the more important story continues to be with the Fed.  U.S. economic data have been strong enough for the Fed to plan on raising short-term rates.  But it’s a difficult maneuver, one complicated by external factors—like Greece and China—but also by the unusual nature of U.S. economic expansion.  Inflation, wage growth and labor participation remain abnormally low given where we are in the economic cycle.  If the Fed moves too quickly or goes too far, it risks creating a recession, a condition that historically has been one of the greatest risks to equities.  On the other hand, if the Fed remains too easy with policy, it could set the stage for financial market “melt-ups” in which valuations spiral upward.  These melt-ups may be enjoyable on the way up, but usually end with high volatility, outsized losses and numerous bankruptcies.

The chart on the next page illustrates a model from the economist Greg Mankiw.  Using unemployment and inflation, his model does a good job of indicating where Fed policy may go.  With the decline in the unemployment rate, it indicates the Fed’s neutral policy rate could be close to three percent. 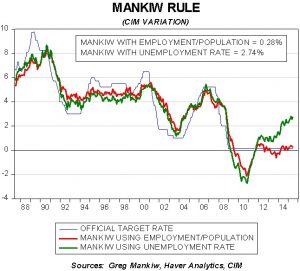 However, we have adjusted the model to account for the low labor participation rate and this modification indicates no need for the Fed to raise rates. Our work indicates the Fed is likely to choose a path in between, gradually raising rates in a manner that is unlikely to cause a recession. Still, we note that it will be very important to monitor the Fed’s actions and how the economy is affected.

Although stock returns in the first half of the year were quite limited, this condition is not necessarily a negative situation. Over the past several years, rising valuations have provided an additive lift to equities and were a significant part of the above-average returns delivered by the market. As a result, stocks have moved out of the “cheap” valuation range and crossed into the “moderately expensive” category.  This doesn’t necessarily mean a bubble has formed, but it does indicate returns are likely to be lower going forward.  The upside is that the recent sideways direction of equities can allow for earnings and other fundamentals to catch up with prices.  It also indicates that equity investors are exhibiting a measure of risk aversion, and aren’t necessarily willing to pay any price for stocks.  So while the near-term performance may be somewhat disappointing relative to the past few years, it helps set the stage for healthier equity markets in the long run.  This may be just what the Fed is seeking as it sets out to raise interest rates.

In this environment, we believe it is important to consider both valuation as well as growth potential.  Our work indicates that although foreign equities have generally underperformed those in the U.S., their valuations aren’t quite low enough to adequately compensate most investors for the lower growth we anticipate.  So, at this point, we remain out of both developed country and emerging market equities, except for aggressive growth investors.

The domestic equity allocations remain diversified across the spectrum of capitalization sizes to include large, mid and small caps.  Our bias remains toward mid and small caps, because their growth potential appears to be higher.  However, these equity asset classes also tend to have higher volatility relative to large caps, so we also include large caps.  Our sector guidance within large caps favors technology and consumer discretionary sectors, while we are underweight utilities, telecom and energy.  Our style guidance remains overweight growth versus value (70/30).  We continue to believe growth-oriented industries may perform relatively well as we move into the time frame when the Fed begins to raise interest rates.

For both intermediate and longer term bonds, yields have become more volatile in recent months as investors digested the news coming out of Greece and China.  At the same time, bond investors have a close eye on the Fed, watching for guidance with regard to when and how much the Fed will tighten.  The various cross-currents generally pressured interest rates higher in the first half of the year, but our outlook for the overall bond market remains in place.  U.S. growth should remain below average, but is likely to be higher than most developed countries.  For these reasons, we don’t expect rates to move significantly higher and foreign interest in U.S. bonds should remain relatively strong.  Therefore, our bond allocations continue to involve intermediate and longer maturity bonds.

Real estate recently faced some headwinds as interest rates around the world moved upward, yet fundamentals remain strong and we believe foreign interest for U.S. real estate is likely to remain relatively high.  Still, we believe real estate at this point in the cycle appears most appropriate where income is a primary objective.  Therefore, we reduce the real estate allocation this quarter in growth-oriented portfolios.

Returns in the commodity asset class remain low and we don’t expect a turnaround anytime soon.  Global supply remains high and has yet to fully adjust to lower demand, especially from China, but also from many developed countries.  At this point, we remain completely out of the asset class.