The Federal Reserve’s pivot at the beginning of the year from a hawkish tone to a dovish posture has greatly influenced sentiment and markets. Though we foresee slowing economic growth over our three-year forecast period, we believe that the Fed’s accommodation will continue to propel the economy and risk-based assets through the end of this year and into next year’s election cycle. We maintain our expectation of 2.7% GDP growth for 2019.

The litmus test for our forecast will be the Fed’s upcoming meeting in Chicago on June 4-5, where the committee will be examining and evaluating its strategies, tools and communications surrounding its formulation of monetary policy. They have been on record regarding their views that labor market conditions are close to maximum employment, yet several members have mentioned the amount of slack that exists in the economy as measured by the employment/population ratio.

We expect the Fed will take a more nuanced approach to inflation targeting, allowing CPI-U to advance above its 2% hurdle until the shortfalls recorded over the past decade are back-filled. If our thesis is confirmed, the potential for a decrease in the fed funds rate later this year becomes a likelihood as indicated by the line on the chart showing the Mankiw Rule model using the employment/population ratio. This will hold short-term advantages for the economy and risk assets, but with long-term ramifications for inflation and, thereby, future bond and stock prices. 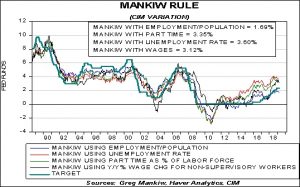 The current administration continues to engage in trade negotiations with China and the European Union (EU), and the new NAFTA, now USMCA, is under consideration by Congress. A favorable resolution of any or all of these would be positive for U.S. equities, where the market is still discounting long-term effects of trade barriers. Note that our expectations are not for a return to globalization. Rather, we fully anticipate general de-globalization efforts by the current administration as it seeks bilateral trade agreements favorable to the U.S. in contrast to the multilateral trade deals that were the basis of the globalization trend since the 1980s.

Beyond the U.S., our expectations are for continued softness in global growth and the potential for recession in several jurisdictions, the most notable being Italy and potentially Germany. The European Central Bank (ECB) has indicated that any tightening moves it harbored for this year have been pushed back until next year, at the earliest. Germany will be electing a new chancellor this fall and the ECB will have a new president on November 1, both of whom will exert influence on fiscal and monetary policies. Further influences emanate from China, with its economic stimulus measures and its stated willingness to accept trade measures from the EU. Although our thesis calls for a weakening U.S. dollar over our three-year forecast period, and we can envision an environment where European markets become attractive, there are too many near-term unknowns in Europe that encourage our posture of keeping risk assets in the U.S. for the foreseeable future.

Despite U.S. corporate profitability growth having slowed from last year’s torrid pace, it has been growth nonetheless. Margins remain high and, in an era of continued deregulation, have the potential to expand further. The decrease in earnings estimates for the first and second quarters have created the possibility for positive earnings surprises. Moreover, our expectations that the Fed will become even more dovish, and potentially politicized in advance of next year’s election season, adds more conviction for our historically high U.S. equity allocations in the strategies. A further element that would stoke the equity furnace is the fear of missing out by retail investors.

According to Morningstar, over the last twelve months investors have pulled nearly $425 billion out of U.S. equity separate accounts and mutual funds. Should retail investors replace their fear of the market with the fear of missing out, the U.S. equity market would become turbocharged. Although our consensus over our full three-year forecast period is certainly less rosy, we are encouraged to retain our historically high weighting to equities in the strategies for the time being. 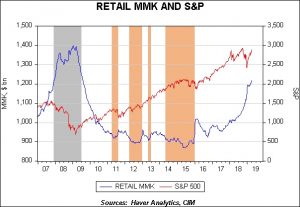 Within investing styles, we maintain our neutral posture between value and growth. Among sectors, Materials continue to be overweight. We removed the overweight to the Energy and Health Care sectors in favor of overweights to Industrials, where earnings and growth metrics are attractive, and Technology, which was reconfigured late last year as part of the Communication Services realignment and offers a favorable position for the latter stages of an economic cycle.

The latter stages of an economic cycle are typically favorable for mid-cap stocks, which are decidedly overweight in each of the strategies. Attractive valuations using traditional measures of P/E and P/B for the S&P 400 Mid-Cap Index relative to the S&P 500 further our decision to overweight this sub-asset class. The Growth and Aggressive Growth strategies are both overweight to small cap stocks owing to the likelihood of continued elevated M&A activity over the course of the year.

Outside the U.S., we are cautious over the near term. Relative valuations are attractive overseas and our view is for a decline in the value of the U.S. dollar versus major currencies, which would provide a tailwind for returns. However, the cauldron of factors influencing Europe over the course of this year encourages us to remain on the sidelines in the near term. Therefore, we hold all risk assets in the U.S. with no allocation to foreign equities in any of the strategies.

The dovish and potentially politicized Fed going into the election season guides our view that the yield curve will return to its traditional slope over the course of the year, principally through a reduction in short-term rates. Through our full three-year forecast period, we are positive on longer term rates as long Treasuries have significantly attractive yields relative to those from other developed countries. While we harbor concerns regarding the nearly $5 trillion in corporate debt maturing between 2019 and 2023, compounded by the change in interest expense deductibility in 2022 from 30% of EBITDA to 30% EBIT, these concerns are offset by overall corporate health and the recognition that bonds can be refinanced at a competitive price. We extend the duration of bond holdings in the strategies with income objectives, and retain the laddered structure as a nucleus beyond the short-term segment. We eliminated our former position in speculative grade bonds due to concerns about embedded risks in certain sectors as well as our expectations for spread widening over the full forecast period from their current low levels.

While REITs experienced tremendous total returns in the first quarter, our consensus forecast is for them to only deliver returns commensurate with dividends over the next three years. Accordingly, we reduced the allocation by half in the only strategy where REITs are deployed. We retain the remaining small allocation for the diversified income stream they provide.

We maintain a modest allocation in gold given its ability to offer a hedge against geopolitical risk and the safe haven it can afford during an uncertain climate for the U.S. dollar.