Our expectations for growth through our three-year forecast period are tempered by supply chain rebuilding, labor issues, a less accommodative Fed, and an uncertain path for ratification of an infrastructure package. Although we expect the economy to move from recovery into expansion, it likely won’t be in a linear fashion. Rather, the drumbeat of Fed tapering, a surge in retirements, supply shortages, and fiscal intransigence will create quarterly fits and starts in the economic progression. With regard to retirements, it is notable that policy accommodation has helped boost both financial and real asset prices since the beginning of the pandemic-induced lockdowns over 18 months ago. This rise in asset prices has made it easier for baby boomers to retire. 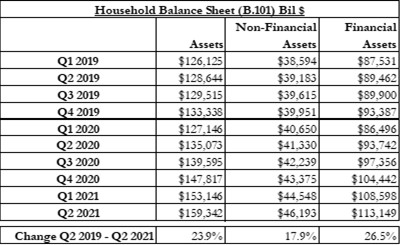 A sizable segment of the working population has found it economically feasible to retire, adding to labor pressure across virtually all sectors and industries. Against this force of labor is Fed monetary policy that will likely belatedly deliver needed discipline by normalizing policy. Though tapering of the aggressive $120 billion monthly balance sheet purchases of Treasuries and mortgages may well be concluded by this time next year, we believe an increase in the fed funds rate will be delayed. While the recently released dots plot indicates an earlier rise, the forecasts were made by a roster that has seen more changes than most college basketball teams. The known and potential departures on the FOMC underscore the increased probability of a Fed that leans toward a continued dovish policy that will delay a rate increase as long as possible. Although elevated numbers of retirees plus the ongoing pandemic would suggest deflation, the monetary accommodation by the Fed, crimping supply chains, and healthy household balance sheets not only offset deflationary pressures, but may support a rate of inflation persisting above the Fed’s 2% target level for the next 12-18 months, especially when including the more volatile segments of food and energy. The implied LIBOR rate, two years out, indicates the market’s anticipation for the Fed to begin raising rates. It is worth noting that, in most instances, the market’s expectations precede the Fed’s initiation of tightening by at least several quarters. Although the number of observations can hardly be characterized as statistically significant, this measure is the confluence of all market participants and, therefore, indicative of the broad range of expectations. 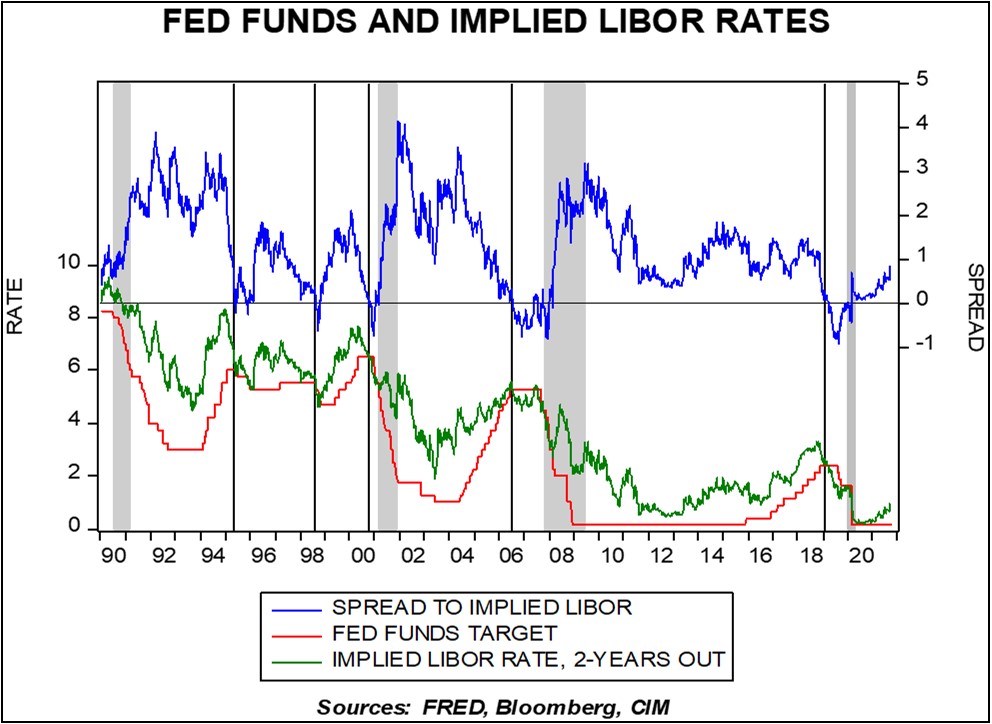 From a global perspective, the IMF recently cut its global growth forecast modestly for 2021, from 6% to 5.9%, due to the continued supply/demand mismatch in global supply chains. Despite this change, the IMF maintained its 2022 outlook with a moderation to 4.9%. Global central banks are responding differently to inflationary pressures as Brazil, Mexico, New Zealand, Norway, and South Korea are among those that have already engaged in monetary tightening, while the ECB and BOJ are expected to maintain aggressive accommodation. While most expect recent inflationary pressures to subside, the uncharted nature of the pandemic has most policymakers on guard if inflation expectations prove to be more material. Adding to the economic dilemma are issues in China, inclusive of the property woes and saber-rattling toward Taiwan. Both issues heighten geopolitical risk. However, amassing U.S. and global elements into our forecast, we find that while the variability of outcomes is broad, the potential for recession within the next three years is low, albeit greater than zero.

Over the near term, we expect equities to fare well as earnings growth continues, liquidity remains abundant, and investor sentiment is elevated. As a result, the relatively high allocations to equities are preserved this quarter. Beneath the veneer of the overall equity complex, we find a divergence in prospects among sectors in the U.S. The ability to navigate through supply constraints and pass higher prices onto consumers will likely favor lower capitalization companies as dexterity should be rewarded. In addition, more cyclically oriented companies have historically proven to have greater resilience during bouts of inflation, even during abbreviated periods such as we expect to unfold over the next 12-18 months.

Longer term, the outlook is more indeterminate. Though the prior statement usually goes without saying, given the range of potential monetary and fiscal policy responses to labor, supply, and possible inflationary pressures, it carries even greater gravity over the next three years that compose our forecast period. Regarding the first element of labor, the analogue from the 1918 pandemic provides a level of comfort that a full recovery is probable, yet will probably evolve over several years. Similarly, the supply constraints should be resolved and help dampen the third element of pricing pressures on goods and services. However, the potential exists for lower fiscal support and even reactionary tightening of monetary policy toward the end of the period, which could lead to a decline in investor sentiment. Moreover, as the labor force recovers, aggregate labor costs could increase to the point of dampening corporate earnings. These aspects conspire to encourage some restraint on equity risk. Consequently, the heavy tilt toward value remains as does the U.S. large cap sector overweights to Materials, Industrials, Financials, and Housing. 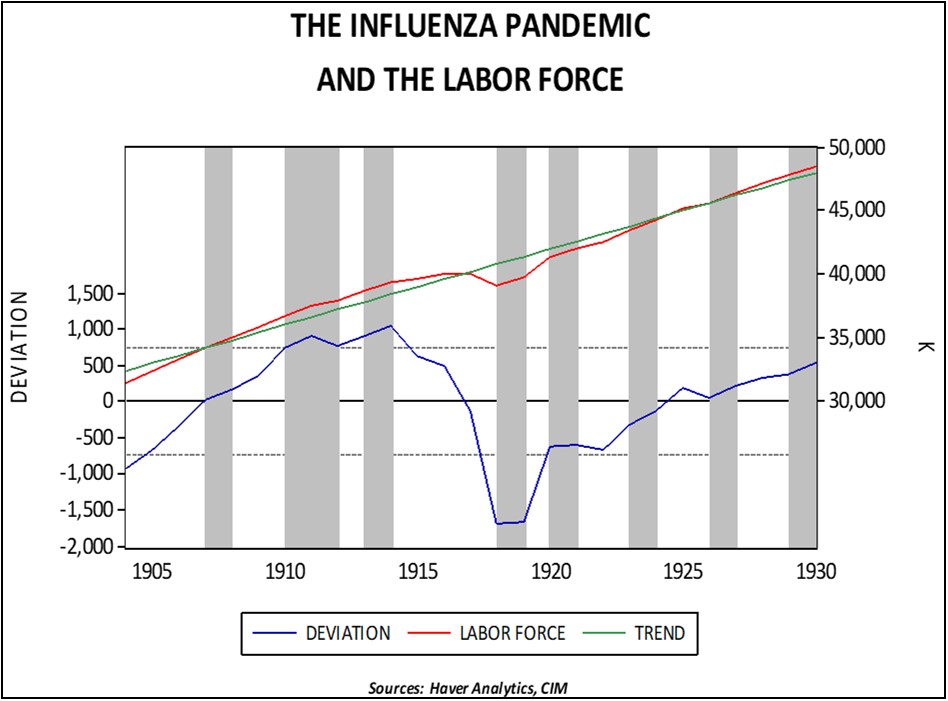 Although global economies are experiencing the same supply chain issues and inflationary effects as the U.S., the ECB and BOJ appear committed to aggressive monetary accommodation. On the fiscal side, changes in government in Germany and Japan add some questions to their respective fiscal policies. Regardless of who they choose as leaders, they are expected to continue to provide fiscal support to their economies. While lagging the U.S. by several months in their fight against COVID, Japan and especially Europe appear to be well into their economic recoveries. In the U.K., the elimination of COVID restrictions has led to solid GDP growth. While the potential exists for a rate increase by the BOE prior to year-end and trade issues with the EU may continue to grow, corporate health is solid. Within emerging markets, however, the advantages many might have as they emerge from their fight against COVID are overshadowed by concerns surrounding China. Not only does China account for at least one-third of popular broad emerging market indices, but it wields significant influence on other emerging economies, particularly in the Pacific Basin and Latin America. Even ignoring the geopolitical risk engendered by its increasing pressure on Taiwan, China’s slowing growth and real estate market difficulties may have contiguous effects. Due to our views on developed markets, in general, and Europe and the U.K., in particular, the allocations to developed markets remain high, with overweights to the U.K. and Europe in strategies where it is risk appropriate. Emerging market exposure is eliminated in all strategies except Aggressive Growth, where the remaining investment excludes mainland Chinese equities.

As noted above, our expectations call for the Fed to conclude its balance sheet tapering prior to increasing the fed funds rate, which we believe will be later than many market participants anticipate. A plausible consequence is that the Fed will be viewed as being reactive, causing yields to rise as inflation becomes seen as stickier rather than “transitory,” leading to an intra-period steepening of the yield curve. Nonetheless, our expectation is that inflation will prove less than durable owing to the eventual increases in the fed funds rate, resulting in a relatively flat yield curve by the end of our three-year forecast period. Among credits, over the course of this year, spreads on both investment-grade and speculative-grade debt have ground tighter. However, as noted in the Stock Market Outlook, we anticipate that labor issues could lead to margin compression toward the back-end of our forecast period which could translate into higher borrowing costs and a resultant widening of spreads for investment-grade corporates and especially speculative-grade bonds. Regarding mortgage-backed securities [MBS], the spread versus Treasuries is fairly tight and not particularly attractive for the environment we envision. Consequently, MBS are excluded and we have an overweight to Treasuries in the taxable strategies where income is an objective.

Although traditional segments of the REIT complex have recovered over the past quarter, particularly office and retail, the variance of valuations between the traditional and technology segments remains wide. While we expect the traditional segments should continue to recover, valuations ascribed to warehouses, data centers, and cell towers may restrain returns. Therefore, our expectation for REIT returns over the full forecast period are roughly equivalent with the expected dividend yield. As a result, REITs are employed solely in the Income strategy for the varied source of income they provide.

Commodities continue to be included across the array of strategies. Albeit slightly restrained, our expectation for global economic recovery encourages an allocation to a broad basket of commodities, with an emphasis on energy. Gold is retained as a potential haven given heightened geopolitical risk emanating from a number of domiciles and especially from China.