The overall economic picture, while still positive, has exhibited recent signs of lethargy. Sentiment remains elevated, though some important surveys are lower than earlier in the year. As an example, the Duke University CFO Global Business Outlook for Q3 2019 indicates less optimism and has trended down from this period last year.[1] Earnings may come under pressure, particularly from trade, as firms continue to absorb the cost of tariffs and reorder supply chains. In addition, as the accompanying chart illustrates, the Chicago Fed’s National Activity Index is measuring softness at a level last seen in 2015. 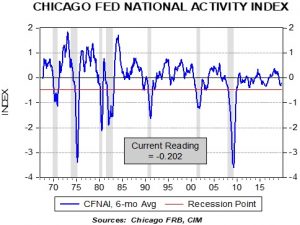 On the plus side, GDP prints have been positive as have corporate earnings surprises over the latest quarter. The Federal Reserve shaved a quarter-point from the fed funds rate in each of its past two meetings and announced the curtailment of the reduction of its balance sheet beginning on August 1. Owing to recent primary dealers funding pressures, the Fed also expanded its overnight reverse repurchase facility, effectively increasing its balance sheet. It also announced a $60 billion per month increase in the balance sheet through February 2020.

While we believe the Fed will continue to exhibit an accommodative stance, with the potential for further cuts to the fed funds rate and expansion of its balance sheet to preserve short-term funding needs, the Fed may have been too tardy in its pivot to easing. Consequently, there is the potential for a decrease in economic activity. 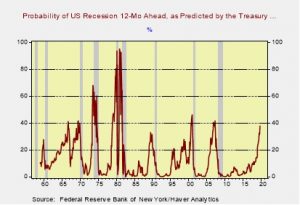 This chart estimates the probability of recession, a year into the future, based on the yield curve. The current level would be consistent with a recession later next year. In general, the financial indicators of the business cycle are signaling an increased likelihood of recession. On the other hand, purely economic indicators are still signaling a modest expansion. Overall, we would not shift portfolios to a fully defensive posture until both types of indicators indicate recession.

Global economic conditions are similarly mixed. In his last maneuver as chair of the European Central Bank, Mario Draghi furthered the ECB’s ultra-easy monetary policy. Similarly, the Bank of Japan noted it may take preemptive action against economic risks through greater easing. Germany’s GDP declined slightly last quarter and is expected to remain sluggish, especially as its export-oriented economy is influenced by trade tensions. Conversely, the global appetite for yield has helped to lower financing costs. Globally there is roughly $15 trillion of negative-yielding debt, representing almost a quarter of total debt outstanding. This helps support global economies, making it easier for marginal companies to remain solvent, yet with distortions that could hold longer term consequences.

Against this varied backdrop, we find it prudent to lessen our historically high allocations to risk-based assets, preferring to adopt a more neutral posture with associated offsets as detailed in the strategy section of this document (p.5). In deference to global economic uncertainty, all risk exposures remain in the U.S.

In the U.S., earnings growth is likely to be more restrained than what we have experienced over the past three years. As noted above, the CFO survey by Duke University is more muted, with optimism regarding the U.S. economy as well as their own companies lower than prior quarters. Another complication to the earnings picture is the revision to the Bureau of Economic Analysis [BEA] profit calculations. Prior to the revision the operating earnings for the S&P 500 were marginally elevated, yet within model ranges. However, due to the revision, our model suggests that absent a durable catalyst, pressure on earnings growth is likely. As a result, we are reducing our allocations to risk assets and concentrating in the larger capitalization, higher quality segments of U.S. stocks. 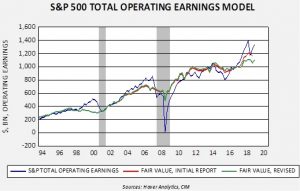 As with the past several quarters, we express near-term caution regarding non-U.S. developed and emerging markets. Despite valuations for non-U.S. stocks generally being attractive relative to U.S. counterparts, the elevated level of global economic uncertainty encourages our purely domestic exposure. Within investing styles, we have initiated a 60/40 tilt to value over growth and have introduced an allocation to a quality factor focusing on profitability, earnings quality and lower leverage. Additionally, we have modified the large cap equity sector weightings, retaining a slight overweight to Technology and introducing overweights to the Consumer Staples and Health Care sectors. Among market capitalizations, current exposures now favor large capitalization companies over mid-cap and small cap. Although trailing valuations of lower market cap companies appear attractive, the potential for earnings compression leads us to lean toward firms with larger market capitalizations, particularly those with more defensive characteristics.

The more accommodative posture of the Fed combined with the global appetite for yield should lead to a normally sloped yield curve over the course of the next several quarters. Over our three-year forecast period, we regard longer term Treasuries as relatively attractive given the global yield appetite and the potential for gravitational pull exerted by $15 trillion of bonds outstanding with negative yields. Additionally, longer term U.S. Treasuries should prove resilient in the event of more volatile global equity markets. Although nearly $5 trillion of corporate debt will be maturing before 2023, our caution is directed toward speculative grade, or high yield, corporate bonds where we expect spread widening to occur.

The duration of bond holdings in the strategies with income objectives has been extended slightly, accruing from our forecast for an accommodative Fed, a slowing economy, lack of inflationary pressure and global demand for bonds. We retain the laddered structure as a nucleus beyond the short-term segment in these strategies.

Despite the outsized returns that many REITs have enjoyed during 2019, the combination of our forecast for rates, the lack of excesses in the segment and the more diversified pool of enterprises leads to our constructive view on REITs. As a result, REITs are included in the income-oriented strategies given the diversified income stream they provide.

We have increased the prior allocation to gold given its ability to offer a hedge against geopolitical risks combined with the safe haven it can afford during an uncertain climate for both equities and the U.S. dollar.