The U.S. economy continues to be on sound footing. Real GDP, as exhibited in the accompanying chart, has been growing for over nine years, representing the second longest U.S. economic expansion on record. Sentiment, as measured by the NFIB Small Business Optimism Index and the University of Michigan Consumer Sentiment Index, remains high. Inflation is contained, with readings of CPI regularly registering below the 20-year average. Corporate earnings are strong, with the vast majority of firms reporting results in the second quarter in excess of expectations. 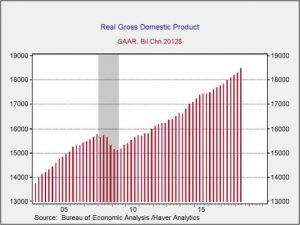 Although economic conditions are positive and appetites among U.S. businesses and consumers are healthy, we are cognizant that events can transpire to upset a field of roses and buttercups. Trade frictions have commanded the headlines since February. Though we readily admit that tariffs and other barriers to trade have the potential to increase costs, thus leading to lesser profits for businesses and/or the kindling of nascent inflationary pressures, we believe that new supply chains can be woven to circumvent the barriers, thereby mitigating the full economic consequences of tariffs and trade obstacles. Of greater consequence, we believe, are lagging effects of last year’s tax reform. One area we have identified as being potentially poignant is the oversight among many rank-and-file workers to adjust their withholding in light of the modified tax tables. Though they have enjoyed higher take-home pay each month, those who have previously basked in a fat refund check during past tax seasons may well find themselves with lesser refunds come next spring. Should this affect a substantial proportion of middle income taxpayers, the derivative effects may be a climb in aggregate credit card debt outstanding, reduced consumer expenditures on travel and dining and, more explicitly damaging to the broader economy and thereby GDP, lower demand for consumer durables. In and of itself, diminished tax refunds will not in all likelihood cripple the economy. Yet in concert with the impact of trade policies, albeit diminished, an overall decline in sentiment, wage pressures and perhaps an overzealous Fed, economic conditions may be less appealing by this time next year.

An antithetical example is probably more plausible. In the event of a divided government wrought by the Democrats wrenching the U.S. House and even the Senate from the Republicans during the midterm elections, the Trump administration and Congress may find common ground on infrastructure spending. Should this transpire, it may push what some consider to be an already giddy economy into pure economic ecstasy, thereby propelling the U.S. equity markets to even higher valuations in what we have described as a “melt-up” in prior publications. The other side of the coin in this scenario is a bond market sell-off stemming from either higher issuance of Treasuries and municipals or elevated inflation expectations, or both.

Note that the foregoing paragraphs are certainly not our base case, which is for steady normalization of rates by the Fed, continued economic growth, solid corporate profitability and healthy confidence. Rather, the preceding illustrations are intended to underscore the importance of continually monitoring data to ascertain whether our asset allocation facings are appropriate or are in need of adjustment.  Although diversification among asset classes is a hallmark of modern portfolio theory, allocations based on stagnant assumptions can produce spurious results. Accordingly, expected returns, risk and yields require regular updates to provide proper diversification among asset classes. This is the crux of our cyclical asset allocation process, assessing the expected returns, risk and yields over the ensuing economic cycle utilizing relevant data to ensure risk-appropriate positioning.

Our views on the U.S. equity markets remain favorable. Although the probability of increased volatility is resident, we view the economic landscape as constructive for equities. While tariffs and trade barriers are affecting certain companies unfavorably, we expect corporate profitability in the aggregate to continue its ascent, though at a lower rate than experienced thus far this year, which was aided by changes to the tax code. The repatriation of assets held abroad has already had positive influences on dividends, share repurchases and increased M&A activity, despite the levels of repatriation being lower than the markets originally forecasted. However, as the IRS finalizes its rules on repatriation, the level is likely to grow. Our analysis suggests that this should prove beneficial for prices of companies classified as mid-cap and small cap, as well as in the lower strata of large cap, by virtue of increased M&A activity. Accordingly, all of our asset allocation portfolios have historically high levels of equity exposure and there is a leaning toward mid-cap and small cap equities for the portfolios where it is risk appropriate.

With regard to style and sectors, we find that our existing 60% tilt toward growth remains appropriate at this juncture in the economic cycle. Equities traditionally characterized as growth are generally rewarded in the latter stages of expansions. An area of the growth style that encourages near-term caution include those securities that have been reclassified as part of last quarter’s configuration of the communication services sector. Even though the repositioning has already occurred, we expect some choppiness as an echo from the reclassification. Beyond the tilt to growth, we remain overweight to the energy, financials and materials sectors. Since these contain stocks that are classified mostly as value, the collective overweight to these sectors has the effect of reducing the growth tilt to roughly 55% in the large cap sleeve of the portfolios.

Beyond the U.S., we retain much of last quarter’s non-U.S. equity positioning. Valuations for non-U.S. companies relative to their U.S. counterparts remain compelling, yet returns for U.S.-based investors are obviously influenced by the value of the U.S. dollar. We also have exposures to emerging market equities in the portfolios where risk appropriate.

Hand-wringing over the flattening of the yield curve that was so prominent during the summer months has been supplanted in just a few weeks by concerns of curve steepening caused by increases in inflation expectations. Comments about the bond market are typically filled with hyperbole, but the histrionics this year have seemed to become shrill.  Despite the angst expressed by many, we hold the opinion that in its current trajectory the Fed is moving toward a more sound and normalized footing. We recognize that there exists the potential for a misstep by the Fed, either through being overzealous in efforts to raise fed funds and reduce the size of the balance sheet or by becoming too docile in response to a Tweet storm. However, we believe the laddered positioning that we enacted at the beginning of the year is the appropriate positioning for this phase of the economic cycle. The duration posture of the portfolios tend to be shorter than the broader indices, mostly due to the quarterly erosion effected by the use of the ladders. The portfolios remain heavily exposed to investment-grade credit through the laddered ETFs and the exposure to longer dated Treasuries has been reduced. We continue to harbor some trepidation regarding speculative-grade bonds given their tight spreads to maturity-equivalent Treasuries and the necessity of refinancing nearly $1 trillion of high-yield bonds set to mature between 2019 and 2022. As a result, the exposure to speculative grade bonds is at historically low levels in our portfolios.

We retain an allocation to REITs in the more income-oriented portfolios due to attractive and improving dividend yields and the diversified income stream they afford. Relative to speculative-grade bonds, we find the potential risk/reward to be superior in REITs.

The modest allocation to gold is maintained owing to the combination of its ability to offer a hedge against geopolitical risk and the safe haven it can offer during an uncertain climate for the U.S. dollar.