A broad range of indicators is flashing signs of an impending global contraction and recession in the U.S., the most prominent and oft-cited of which is the inversion of the U.S. Treasury yield curve. The spike in yields across the curve, and particularly in short-term instruments, reflects the surge in inflation over the past year coupled with the efforts of the Fed to harness it. The Fed’s relentless battle against inflation woes have caused it to raise the fed funds rate from its target of 0.25%-0.50% last March to 4.25%-4.50% at its last meeting in December and embark upon quantitative tightening (QT) through the reduction in its balance sheet of $95 billion per month. While many credit these actions with helping to settle inflation in core goods, which was certainly aided by an untangling of supply shortages since the U.S. COVID lockdowns, inflation in core services remains ascendant. The Fed’s pronouncements have been decidedly hawkish as it attempts to slow the economy through dampening demand and targeting the wide gap between job openings and the rate of hiring. The Fed’s latest statements underscore the notion that policymakers will continue to increase the fed funds rate until inflation retrenches to  its 2% target.

Despite the rhetoric, markets are anticipating a lessening of the Fed’s zeal. As this accompanying chart indicates, the spread between the fed funds target and the implied LIBOR rate, two-years deferred, has been a harbinger of a change in direction for Fed policy. While this has occurred against the backdrop of an overall decline in interest rates over the period since 1990, a negative spread has invariably signaled when the central bank has moved too far, as is now the case to an extreme. 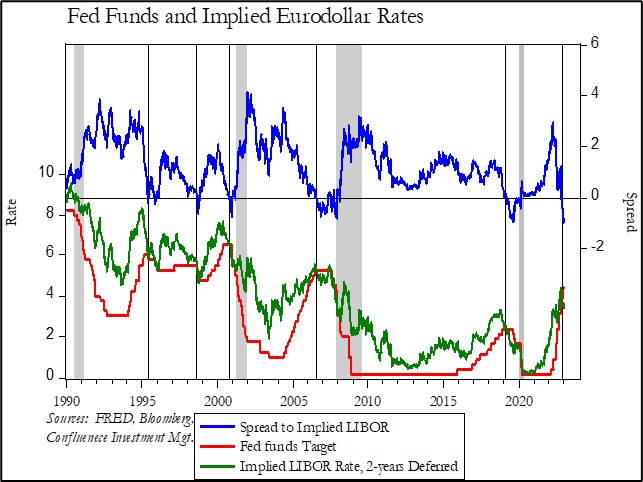 The prospect of a global economic contraction commencing over the next several quarters helped frame our expectations for the overall economy and markets over our full three-year forecast period. Although the Atlanta Fed’s GDPNow estimates for this quarter still exhibit growth, a durably inverted yield curve, elevated inflation, and sentiment point to a recessionary environment in the near term. Confluence’s proprietary Diffusion Index indicates that the probability of a contraction in the U.S. is elevated. Nevertheless, our base case is for a garden-variety recession, as the excesses that were produced in prior severe recessions are absent, owing to the relative brevity of the recent business cycle. Accordingly, our view is that a normal contraction will be followed by a healthy recovery, with the possibility of an expansion toward the end of our forecast period.

Periods of inflation typically lead to a decline in price/earnings ratios, with both prices and earnings being affected. This is a natural adjustment, as the discount mechanism is elevated for future earnings, especially for longer-duration equities such as certain technology stocks that carry higher earnings expectations further into the future. Moreover, we typically see earnings compression with elevated inflation, not simply due to increased costs of production, but more importantly rises in the cost of labor, which is especially prominent in services. The ability of companies to push rising costs onto consumers has varying degrees of limitation, dependent upon the elasticity of demand for a company’s products or services. Essential products or services obviously have more durable, or inelastic, demand such that costs can be more readily passed onto end users.

With equity markets being anticipatory, we believe the declines experienced in 2022 were handicapping a future recession, to a degree. Although U.S. stocks may dip further, our belief is that most of the negative price movement has largely been already experienced. The Fed’s aggressive battle against inflation has at least indirectly contributed to a relaxation of formerly tight labor markets, as indicated by the recent spate of layoffs from mega-cap technology companies as well as an abrupt slowdown in housing dictated by higher mortgage rates. While it is too early to expect the Fed to pivot on fed funds, our view is that QT will be suspended over the next few quarters. Moreover, the lessons gleaned from March 2020 support our expectation that any relief the Fed may offer in a downturn will be along the lines of the “alphabet soup” type of targeted programs that were offered as support for certain segments at that time as opposed to the blunt instrument of easing fed funds.

The widely anticipated economic slowdown should be normal, by historical standards. Consequently, our three-year forecast is for positive returns for U.S. equities. That expectation extends to and is even magnified for lower capitalization stocks. We expect small cap value stocks with strong free cash flow to perform particularly well, as they typically have when the U.S. has emerged from prior recessions. In addition, we anticipate that an economic recovery within our forecast period will aid the Industrials and Metals/Mining sectors, which are overweight in the strategies, along with the continuation of the overweights to Energy and Aerospace & Defense.

Due to favorable relative valuations of international developed stocks versus U.S. counterparts, combined with the prospect of a weakening U.S. dollar, we are constructive toward international equities. The reconstitution of supply chains and China’s stimulus and emergence from COVID lockdowns further bolster the prospects for developed market stocks, particularly those engaged in the export of commodities. Accordingly, all strategies now hold a sizable position in international stocks, and overweights to Canada and Australia are introduced in the more risk-tolerant strategies of Growth and Aggressive Growth. 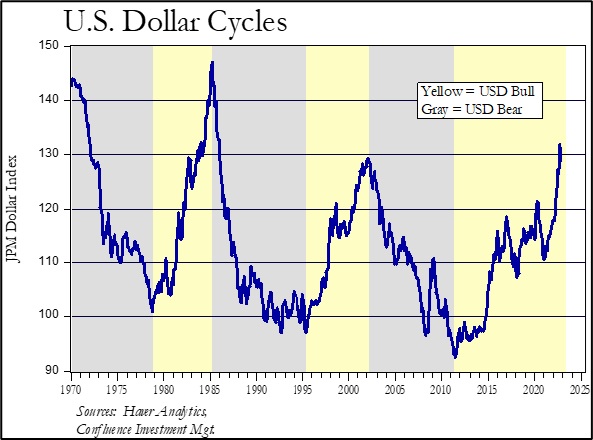 As noted earlier, while we anticipate an end to the Fed’s current QT balance sheet reduction of $95 billion per month, in our view a decrease in the fed funds rate to the former ultra-low levels is very unlikely, even in the face of a recession. While we expect the steep inversion of the U.S. Treasury yield curve to evaporate over our three-year forecast period, it is likely that the curve will flatten through a decrease in yields in the one- to three- year segment in combination with a secular increase in long-term rates, as illustrated in the accompanying chart. Accordingly, the positions in extended duration Treasuries via zero-coupon instruments were liquidated to positive effect after their initiation last quarter as we believe their continued utility has evaporated. All bond exposures in the strategies are now short-term, with the sole exception of the Income strategy, which continues to use a 10-year laddered maturity core, an inviolate part of this strategy’s construction. The short-duration posture among the other strategies also reflects our recognition of the small potential that, in the extreme, a bond market panic could lead to a form of yield curve control. 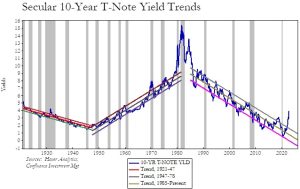 Within corporates, the brevity of the current economic cycle has not seemed to wreak the excesses experienced during longer expansions, except in the low-rated floating rate instruments. Therefore, we expect only modest widening of spreads among investment-grade and BB-rated corporate bonds, the latter of which are employed moderately as equity surrogates in the more conservative strategies in order to provide a degree of risk control over the next several quarters.

Despite valuations seeming compelling in REITs with their weak performance in 2022 compared to other sectors of the U.S. equity market, the strategies remain devoid of REIT exposure. The fragmentation of the REIT market and the lack of conviction surrounding the prospects of certain segments encourage our avoidance of the sector over the near-term. On the other side of the spectrum, commodities appear well-poised for a recovery following a normal recession. We retain an exposure to broad-based commodities with an emphasis on Energy commodities across all strategies. In addition, we increase the weighting to gold for its appeal as a haven during dynamic economic environments.